Marc Toso tried 3 times to capture this ancient petroglyph known as a waterglyph, estimated to be between 2,000 and 1,000 years old. The 3rd time was the charm. 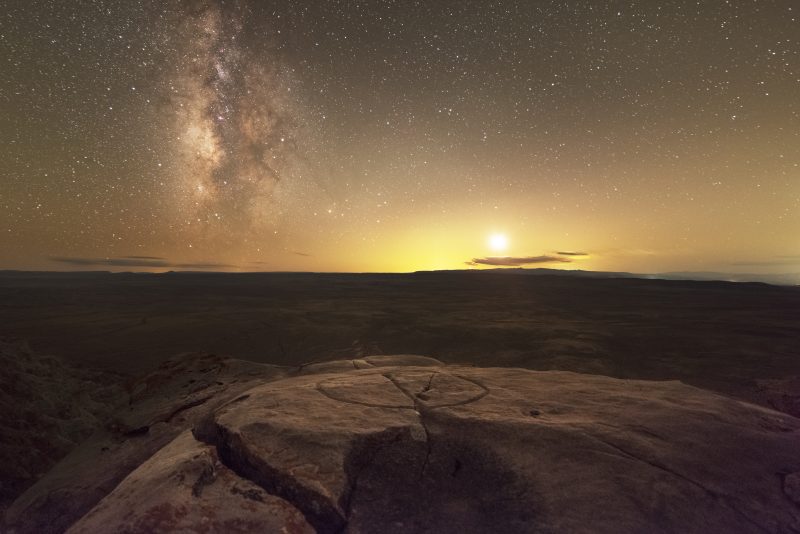 This is an ancient petroglyph known as a waterglyph. It is estimated to be between 2,000 and 1,000 years old. Waterglyphs like this one are believed to be possible sacred sites, sacrificial altars or navigation maps to locate water.

This was my third attempt at this photo. I first had the idea about a year-and-a-half ago when I was shown a picture of this glyph. So, in August a year ago, I loaded up my van and headed down the long and bumpy road up the desert mesa, only to turn around due to the roughness of the road. My 30-year-old vehicle was reminding me of its age and the remoteness of the location …

A year later, in July, I returned with only to have the forecast change to torrential downpour!Not good for night photography and especially terrible when solo in the desert miles from a paved road without phone service. So I spent the night in the rain, then drove home.

A few days ago, I returned with my mountain bike. I discovered a shorter route up a much rougher road. Loaded down with camera and camping gear, I biked the seven miles to the cliff’s edge.

After sunset, the winds picked up, the clouds rolled in, and the rain fell. I cowered in my bivy sac and sleeping bag for about 45 minutes as the rain pelted and the wind ripped branches from the surrounding pinyon.

When the wind stopped, I crawled out. The sky cleared, allowing me about an hour to shoot with the light from the crescent moon (15%).

I took 10 consecutive images and later processed them in Starry Landscape Stacker for noise reduction. This produced a single noise reduced TIFF file.

I then processed the tiff in Photoshop using the curves adjustment tool. The land and sky were both processed separately via Curve Masks.

Bottom line: An ancient petroglyph known as a waterglyph – on the Utah-Arizona border – estimated to be between 2,000 and 1,000 years old.