Between the usual primary and secondary rainbows, you can see a 3rd bow, caused by sunlight reflecting off the water. 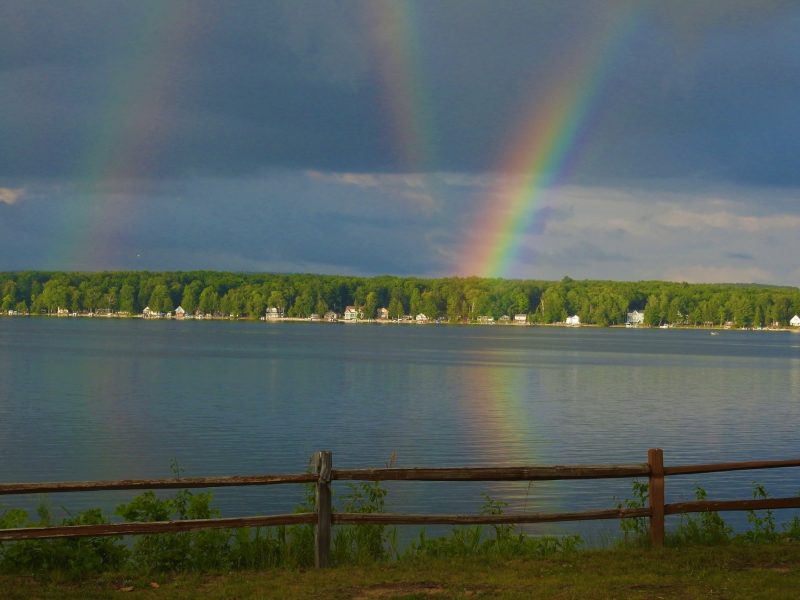 There are primary and secondary rainbows in the sky here (the 2 outside bows; note their colors are reversed). The 3rd bow (the inner one) is called a reflection rainbow. Beverly Ulfig caught this rare rainbow with an iPhone 6.

Beverly Ulfig captured this rainbow photo at Sands Park on Manistee Lake in Kalkaska, Michigan, on July 23, 2018. She wrote:

The entire day had a feel of rain off and on. It did rain at approximately 5:30 p.m. for about 10 minutes. But it remained somewhat cloudy. The sun appeared about 7 p.m., and then we were treated to this special occurrence.

What Beverly caught is a rare type of rainbow, called a reflection rainbow. You sometimes see one over water, as in the photo above. At the great website Atmospheric Optics, Les Cowley explains:

Sunlight reflected off the water and traveling upwards makes the reflection bow. To raindrops, the reflected light appears to come from a second sun the same angular distance below the water as the real sun is above it.

Les has a lot more to say about reflection rainbows, which you can read here.

Thank you, Beverly and Les!