When you see concentric colored rings around a sunset, you might want to grab a tissue. This atmospheric phenomenon results from an abundance of uniformly sized pollen grains, drifting in the air. 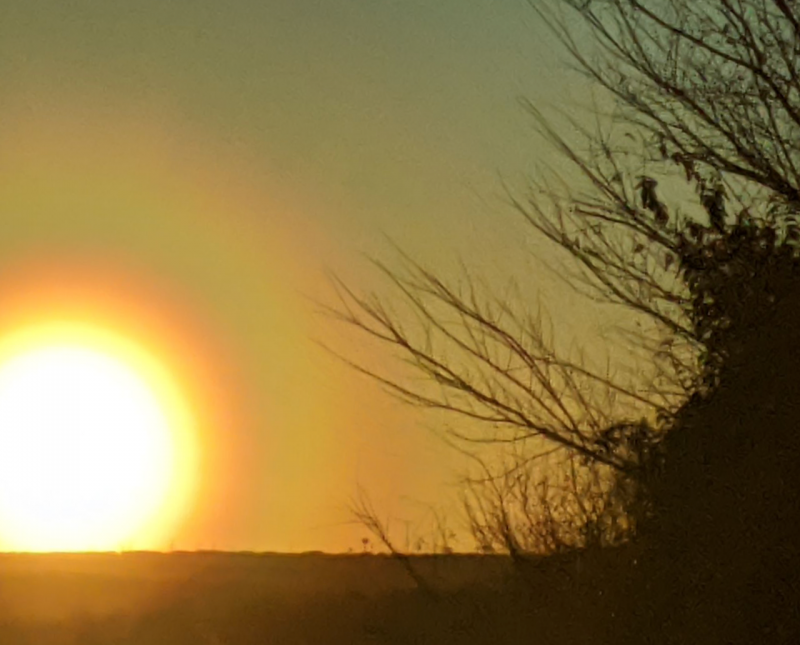 Brian Kuhn in Austin, Texas captured this sunset image on January 5, 2020 and wrote:

I saw a rainbow halo directly around the sun as I was driving … It was most notable when the sun was hidden behind a tree. This is not your normal 22-degree halo … I assume it is an atmospheric phenomenon … I’ve been unable to find any other pictures or descriptions of this type of halo.

Brian, you’re right it’s not a 22-degree halo. Those sorts of haloes are caused by ice crystals in the air. But you’re right that it’s an atmospheric phenomenon. It’s a special kind of corona. Coronas around the sun or moon typically happen when there are small water droplets in the air. Sky optics expert Les Cowley of the great website Atmospheric Optics told us:

To have so many rings, the droplets must have been uniformly sized.

But here’s what’s so unusual about this sort of corona, Les said. The corona you saw is likely not formed by water droplets. Instead, it’s the result of grains of pollen drifting in the air. Les said that – to make a corona of this sort – the pollen grains also must be uniform in size. And – since you live in Austin, which is fondly (or not so fondly) called the allergy capital of the world by its citizens, you probably can guess the source yourself. Yep. It’s the abundant drifting pollen of Austin’s dreaded cedar season.

While many areas of the country experience an allergy reprieve in the winter, Austin has its worst allergy season December through February thanks to the infamous mountain cedar tree. Oddly, the tree is rarely called by its real name, Ashe juniper. The male mountain cedar tree releases puffs of up to a billion pollen grains that then get carried for miles by the wind. The pollen clouds float around and sometimes resemble yellow smoke.

Thus the streets of Austin, Texas, in January are always crowded with people bearing tissues. Some of them probably marveled at this sunset, while cursing its cause. How do I know that? I live here, too! Ker-shoo!

And here’s a 2016 photo of a similar pollen sunset in Austin. The date was January 8, 2016 … exactly the same time of year as Brian’s photo.

Coincidence? I don’t think so. Thanks, Brian!