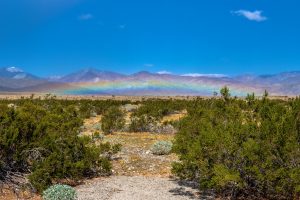 This was taken on route 62 just a bit outside of Joshua Tree as we were headed back to the LA area. It was snowing very fine, but also a fine rain mist was falling. We saw this low rainbow off to the side towards the mountain and immediaty stopped on a side road to apture this. I was told later that this is a rare sight,and it is called a mist bow.

Les Cowley said: I see a rainbow from smallish raindrops. A mist or fog bow is broader and almost white.

Thank you! Your submission has been received!
Oops! Something went wrong while submitting the form.
END_OF_DOCUMENT_TOKEN_TO_BE_REPLACED