Green flashes are best seen over ocean horizons like this one, and, this time, the California wildfires did something helpful. 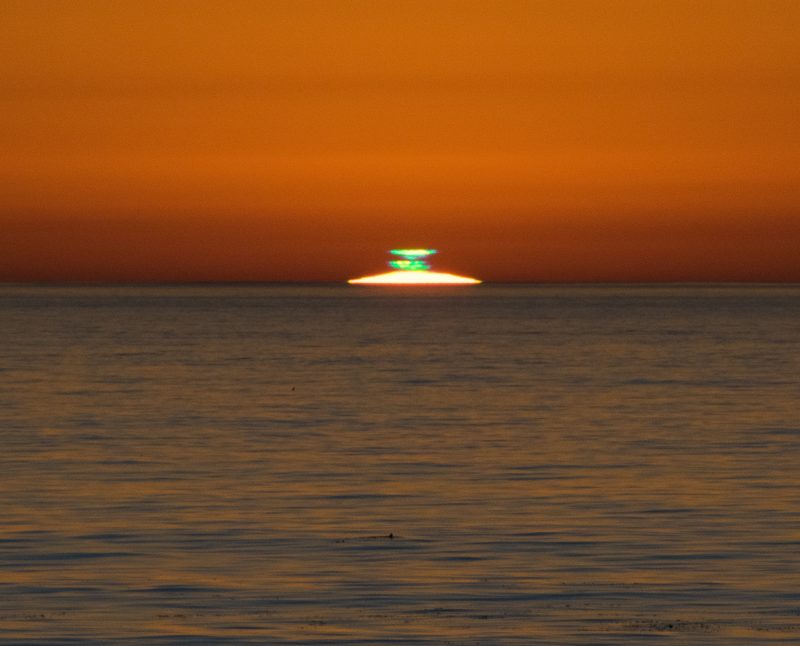 On December 13, 2017, Chris Mannerino was at Sunset Cliffs Natural Park in San Diego, California when he looked out over the Pacific, and caught this spectacular double green flash. It’s what’s called an M-Mir or mock-mirage green flash, caused by one of the frequent temperature inversions off the California coast, which themselves result from warm Santa Ana air off the the land covering air that’s been cooled by an offshore ocean current. Read more about green flashes at Les Cowley’s website, Atmospheric Optics.

I wondered if the recent California wildfires had anything to do with this green flash, and Chris confirmed:

There was a fire southeast of Tijuana, and fire in the north county that were blowing off shore due to the Santa Ana winds.

And, indeed, Les Cowley told me by email that – although smoke doesn’t affect the formation of the flash – the smoke can attenuate the sun’s rays enough to reveal the flash details. As Chris said:

At least something good came from the fires.

Thank you, Chris, and Les!