A composite image – made of photos acquired over 500 days – showing the waxing and waning of Venus, and the changing size of the planet’s visible disk, as it orbits the sun one step inward from Earth.

View at EarthSky Community Photos. | Prabhakaran A (@prabhuskutti on Instagram) in Mleiha, UAE, created this glorious composite image. He wrote: “This image is a composite captured over 500 days at an interval of 1-month starting from the end of 2018 until mid-2020. A few months have been missed due to cloudy weather.” Read more about this photo below. Thank you, Prabhakaran A!

This composite shows the planet Venus (the crescents and gibbous spheres) and the sun (the large, central, yellow object).

Looking to the immediate right of the sun, Venus is shown in its crescent phase just after its October 26, 2018, inferior conjunction, when it passed between Earth and the sun and entered the morning sky. After every passage of Venus between Earth and the sun, Venus always emerges from the sun’s glare as a thin crescent, visible through telescopes. In this series of photos, the crescent located immediately to the right of the sun, on the side of the photo labeled 2018/2019, was the one captured soonest after the 2018 inferior conjunction.

The rest of the photos on the right side of the composite show Venus as it waxed in phase, into and throughout the first half of 2019, in the east before sunup. Its superior conjunction came on August 14, 2019. That was when Venus passed on the far side of the sun from Earth. Note that, as the crescents wax larger, Venus itself gets smaller. That’s because – in late 2018 and the first part of 2019 – Venus was racing ahead of Earth in orbit around the sun, and the distance between our two worlds was increasing.

Looking to the left of the sun in this composite, the first image shows Venus after it emerged from the sun’s glare again, following its August 14, 2019 superior conjunction. At that time, Venus appeared in the evening sky, visible to telescope users as a gibbous sphere, waning in phase, as you can see from the images that move from left to right toward the sun, on the side of the photo marked 2019/2020. During this time, Venus appeared larger and larger in our sky because Venus was catching up to Earth in orbit again, preparing to pass between us and the sun again, which it did last on June 3, 2020.

Thank you, Prabhakaran A! This is a wonderful composite.

If you’re wondering where Venus is now, and in what phase Venus is in now, the image below, from Aurelian Neacsu in Romania, shows Venus on July 11, 2020. Venus is now back in the morning sky, appearing as a waxing crescent to telescope users. And so the cycle continues. 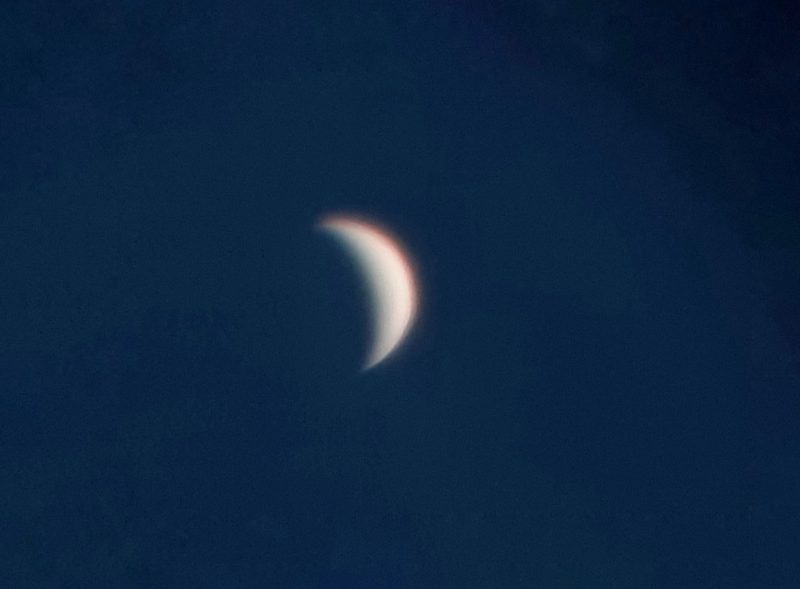 And if you’re having trouble picturing why Venus has phases, and why it grows larger and smaller as seen from Earth, the following illustration might help:

Bottom line: A composite image – made of photos acquired over 500 days – shows the waxing and waning of Venus, and the changing size of the planet’s visible disk, as it orbits the sun one step inward from Earth.