See an animation of this huge solar prominence

When you view this giant feature on the sun, realize that it’s several times the size of Earth! 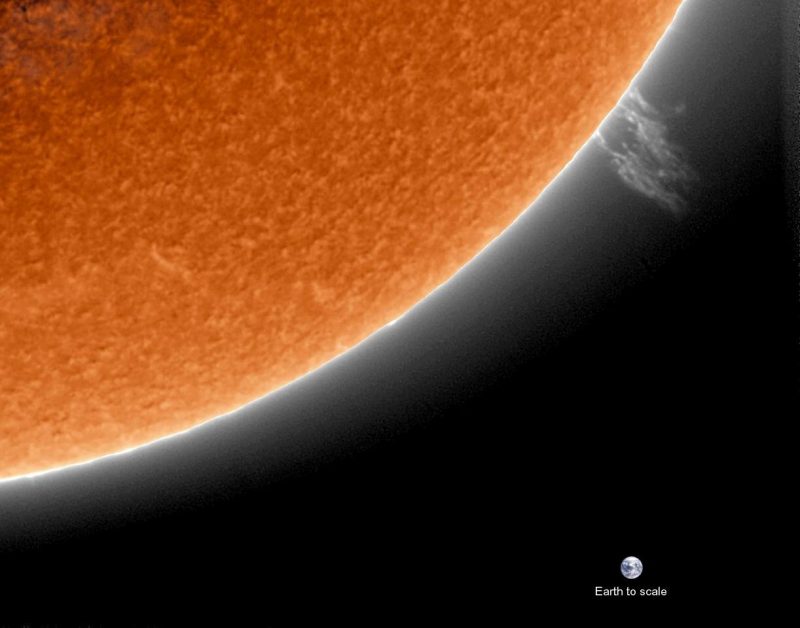 PK Imaging called this “My single best image of the prominence.” Notice the size of Earth in the lower right!

PK Imaging posted this image and animation of a solar prominence – captured from Mt. Lofty Summit, Adelaide, Australia, on January 2, 2019 – at EarthSky Facebook. He wrote:

My animation of the 100,000-km-tall [60,000-mile-tall] solar prominence that occurred on the edge of the sun on January 2, created from 12 captures over 97 minutes using a Lunt 60mm hydrogen-alpha solar telescope.

A solar prominence (also known as a filament when viewed against the solar disk) is a large, bright feature extending outward from the sun’s surface. Prominences are anchored to the sun’s surface in the photosphere [sun’s visible surface], and extend outwards into the sun’s hot outer atmosphere, called the corona. A prominence forms over timescales of about a day, and stable prominences may persist in the corona for several months, looping hundreds of thousands of miles into space. Scientists are still researching how and why prominences are formed.

The red-glowing looped material is plasma, a hot gas comprised of electrically charged hydrogen and helium. The prominence plasma flows along a tangled and twisted structure of magnetic fields generated by the sun’s internal dynamo. An erupting prominence occurs when such a structure becomes unstable and bursts outward, releasing the plasma.