Patricia Evans shares her new skill at astrophotography and a poem by Robert Frost. 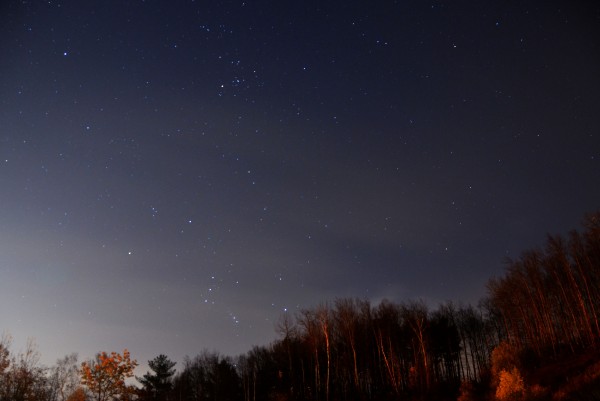 Orion is ascending above the treeline in this photo by Patricia Evans. See more photos by Patricia on her website.

Orion is my favorite constellation. It’s always exciting to see it low on the horizon in the east sky for the first time in November. Last night was the first time I had a chance to see it.

I recently participated in an Astrophotography 101 workshop so I applied my newly learned skills and attempted to capture Orion in a photograph. I still have much to learn about night sky photography, but I was excited to see Orion, and so many other stars, in my photo! The rising moon washed out the lower left corner of the picture but Orion is clear, rising over the treeline on the hillside.

My friend sent me this poem, The Star Splitter by Robert Frost, when she saw it. I am sure you must already know it. It is especially meaningful to me because Robert Frost’s farm is not far from my home. I love the first three lines… they describe exactly how Orion sits just about the treeline on my mountain…

You know Orion always comes up sideways.
Throwing a leg up over our fence of mountains,
And rising on his hands, he looks in on me
Busy outdoors by lantern-light with something
I should have done by daylight, and indeed,
After the ground is frozen, I should have done
Before it froze, and a gust flings a handful
Of waste leaves at my smoky lantern chimney
To make fun of my way of doing things,
Or else fun of Orion’s having caught me.
Has a man, I should like to ask, no rights
These forces are obliged to pay respect to?”
So Brad McLaughlin mingled reckless talk
Of heavenly stars with hugger-mugger farming,
Till having failed at hugger-mugger farming,
He burned his house down for the fire insurance
And spent the proceeds on a telescope
To satisfy a life-long curiosity
About our place among the infinities.

“What do you want with one of those blame things?”
I asked him well beforehand. “Don’t you get one!”
“Don’t call it blamed; there isn’t anything
More blameless in the sense of being less
A weapon in our human fight,” he said.
“I’ll have one if I sell my farm to buy it.”
There where he moved the rocks to plow the ground
And plowed between the rocks he couldn’t move,
Few farms changed hands; so rather than spend years
Trying to sell his farm and then not selling,
He burned his house down for the fire insurance
And bought the telescope with what it came to.
He had been heard to say by several:
“The best thing that we’re put here for’s to see;
The strongest thing that’s given us to see with’s
A telescope. Someone in every town
Seems to me owes it to the town to keep one.
In Littleton it may as well be me.”
After such loose talk it was no surprise
When he did what he did and burned his house down.
Mean laughter went about the town that day
To let him know we weren’t the least imposed on,
And he could wait–we’d see to him to-morrow.
But the first thing next morning we reflected
If one by one we counted people out
For the least sin, it wouldn’t take us long
To get so we had no one left to live with.
For to be social is to be forgiving.
Our thief, the one who does our stealing from us,
We don’t cut off from coming to church suppers,
But what we miss we go to him and ask for.
He promptly gives it back, that is if still
Uneaten, unworn out, or undisposed of.
It wouldn’t do to be too hard on Brad
About his telescope. Beyond the age
Of being given one’s gift for Christmas,
He had to take the best way he knew how
To find himself in one. Well, all we said was
He took a strange thing to be roguish over.
Some sympathy was wasted on the house,
A good old-timer dating back along;
But a house isn’t sentient; the house
Didn’t feel anything. And if it did,
Why not regard it as a sacrifice,
And an old-fashioned sacrifice by fire,
Instead of a new-fashioned one at auction?

Out of a house and so out of a farm
At one stroke (of a match), Brad had to turn
To earn a living on the Concord railroad,
As under-ticket-agent at a station
Where his job, when he wasn’t selling tickets,
Was setting out up track and down, not plants
As on a farm, but planets, evening stars
That varied in their hue from red to green.

He got a good glass for six hundred dollars.
His new job gave him leisure for star-gazing.
Often he bid me come and have a look
Up the brass barrel, velvet black inside,
At a star quaking in the other end.
I recollect a night of broken clouds
And underfoot snow melted down to ice,
And melting further in the wind to mud.
Bradford and I had out the telescope.
We spread our two legs as it spread its three,
Pointed our thoughts the way we pointed it,
And standing at our leisure till the day broke,
Said some of the best things we ever said.
That telescope was christened the Star-splitter,
Because it didn’t do a thing but split
A star in two or three the way you split
A globule of quicksilver in your hand
With one stroke of your finger in the middle.
It’s a star-splitter if there ever was one
And ought to do some good if splitting stars
‘Sa thing to be compared with splitting wood.

We’ve looked and looked, but after all where are we?
Do we know any better where we are,
And how it stands between the night to-night
And a man with a smoky lantern chimney?
How different from the way it ever stood?