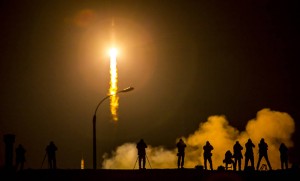 Media photograph the Soyuz TMA-16M spacecraft is seen as it launches to the International Space Station with Expedition 43 NASA Astronaut Scott Kelly, Russian Cosmonauts Mikhail Kornienko, and Gennady Padalka of the Russian Federal Space Agency (Roscosmos) onboard Saturday, March 28, 2015, Kazakh time (March 27 Eastern time) from the Baikonur Cosmodrome in Kazakhstan. As the one-year crew, Kelly and Kornienko will return to Earth on Soyuz TMA-18M in March 2016. Photo Credit (NASA/Bill Ingalls)

Thank you! Your submission has been received!
Oops! Something went wrong while submitting the form.
END_OF_DOCUMENT_TOKEN_TO_BE_REPLACED