One of the sharpest images ever obtained of Mercury

This unnamed crater is only 1.5 kilometers / 0.93 miles wide. It’s made more visible by the deep shadows cast on a Mercury afternoon. 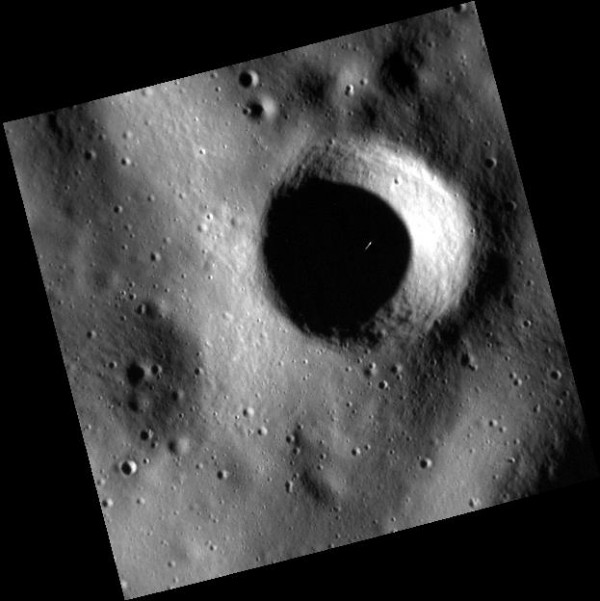 Here is one of sharpest images ever obtained of the sun’s innermost planet, Mercury. It’s a small crater within a 3.75-kilometer / 2.33-mile-wide area within the Hokusai Quadrangle in Mercury’s Northern Hemisphere.

What you see here is seen an unnamed crater only 1.5 kilometers / 0.93 miles wide in the hermean [Mercury] afternoon. The surrounding terrain and the crater profiles appear quite smooth, owing to many millions of years of thermal changes between the hermean day and night as well as micrometeoroids, ‘gardening’ the regolith.

The smallest craters and degraded ghost craters seen in this image are only 20 meters / 65 feet wide.

The bright streak within the crater is a cosmic ray strike on the MDIS NAC CCD.

On September 12, 2014. the MESSENGER spacecraft periherm – its closest point to Mercury – was successfully raised from: 24.3 kilometers / 15.1 miles to 94 kilometers / 58.4 miles, extending the mission further.

Periherm will be raised again on October 24, 2014 and once more on January 21, 2015, when the fuel on board MESSENGER is expected to be depleted.