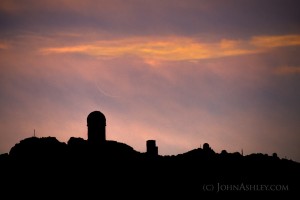 From my morning trip into the desert, a 1.3% sliver moon rises behind the 4-meter Mayall telescope on Kitt Peak, in southern Arizona. This image was made 24 hours and 10 minutes ahead of tomorrow’s new moon, so this crescent moon is 28.5 days old. This faint sliver dissolved into the dawn just a few minutes after rising.

Thank you! Your submission has been received!
Oops! Something went wrong while submitting the form.
END_OF_DOCUMENT_TOKEN_TO_BE_REPLACED