There’s a nova in the sky now. It’s faint and requires a dark sky to be seen, but photos pick it up more easily. Astrophotographer Jeff Dai captured it from Thailand. 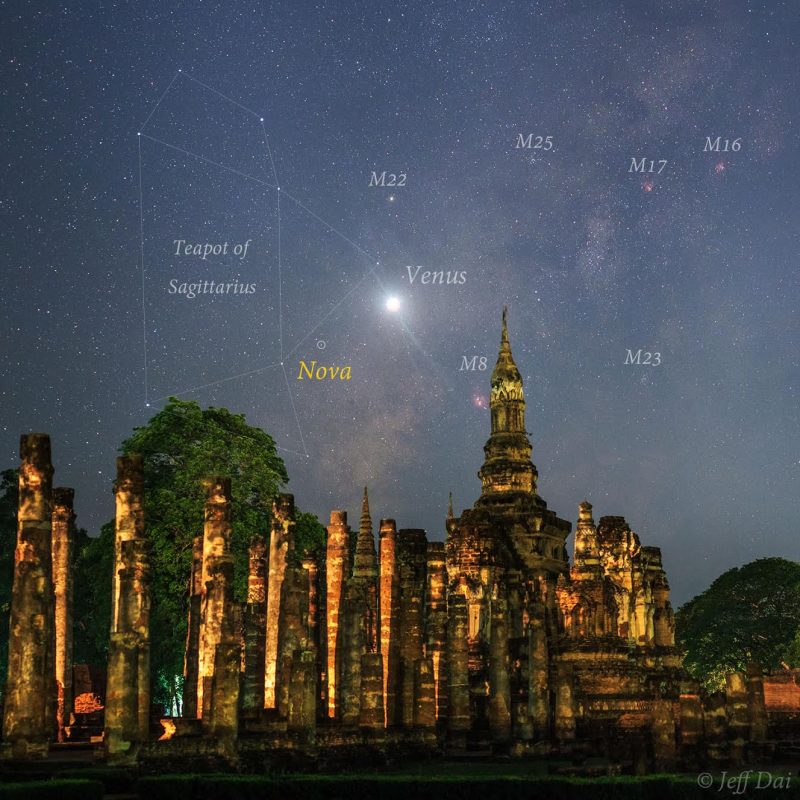 The bright object is Venus! The nova, PNV J18205200-2822100, is visible to the eye, but just barely. The setting is Wat Mahathat in the Sukhothai Historical Park in Thailand. Photo by Jeff Dai.

A Japanese amateur astronomer discovered new nova on October 25, 2016. It’s located in the direction to the constellation Sagittarius the Archer. It was visible only with optical aid at first, but now has now broken the threshold of visibility to the unaided eye. The nova has been labeled PNV J18205200-2822100.

On November 16, I went back to the world heritage site Sukhothai in Thailand (17° N) to have a challenge. Venus, the evening star is my first guide, then the spout of the Sagittarius Teapot.

PNV J18205200-2822100 is in the famous Teapot asterism of the constellation Sagittarius the Archer. It is between the named stars Kaus Borealis (Lambda Sagittarii) and Kaus Media (Delta Sagittarii). Sagittarius isn’t far from the sun’s glare now; it sinks below the western horizon right after dusk, affording only a very narrow window for observing the from mid-northern latitudes. Southern Hemisphere is much better.

Because of light pollution from a nearby town, I could not see the nova with unaided eye, but I could see it in my photographs.

There’s still time to snatch a view of this amazing stellar event. 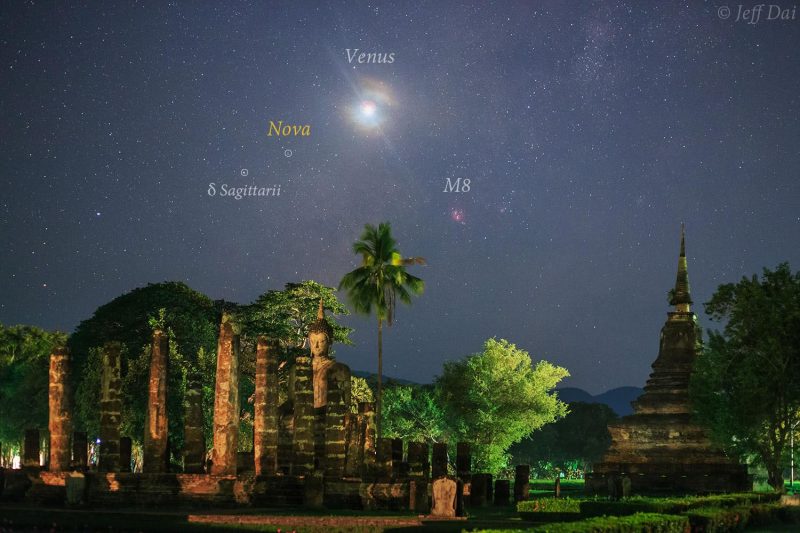 Another view of Wat Mahathat at Sukhothai in Thailand and the part of the sky containing nova PNV J18205200-2822100. Founded by Sri Indraditya between 1292 and 1347, Wat Mahathat was the main temple of the city as well as the ancient Sukhothai kingdom. Photo by Jeff Dai.

By the way, a supernova may be a star that entirely explodes, but the word nova is used to describe a star that suddenly increases in brightness, in this case becoming bright enough to view with the eye from Earth. Novae typically shine brightly for awhile, then return to their original state.

A classical nova occurs in close binary systems where one star is a tiny, dense white dwarf star. The dwarf pulls material from its companion star into a disk around itself. Some of the material from the disk falls onto the white dwarf’s surface and ignites, causing the flare-up in brightness we see. 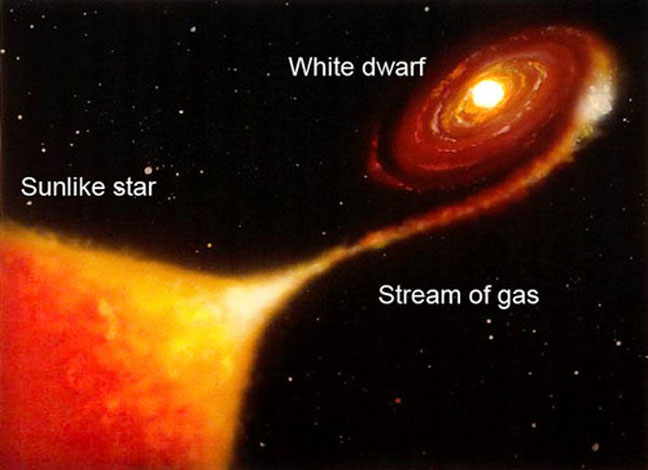 Artist’s illustration of a classical nova via NASA.

Bottom line: Photo of nova PNV J18205200-2822100, discovered in late October, 2016. It has now crossed the threshold of visibility to the unaided eye, but is still very faint. You’ll find finder charts for the nova here.