Riding the roof of the world Jeff Dai 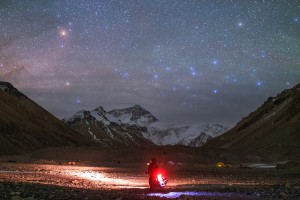 Title: Riding the roof of the world

A lone motorcycle wends its way to Mount Everest’s Base Camp, approaching

from the Chinese side. In this darkening night sky, above the snow and ice

flanked Himalayas, the yellow-red star Antares at the Scorpion’s heart rises at

left; to its right the stars of Centaurus shine their blue light over the top

of the world. Mount Everest’s name is Chomolungma in Tibetan language, often

translated as “mother of the universe.”

Everest base camp is not allowed to live at night. It need 2 hours hiking

on 5000m above sea level. I meet this lonely rider at middle night. He came

from Chengdu, travel to Tibet for 15 days. He quit his job for this journey and

finally reach the foot of Mount Everest at this very night. I asked him if we

could get a lift to the Everest Base Camp, to capture the starry sky over the

top of the world.

The photo tell the story of the explorers at night. When people talk about

Mount Everest, It’s always about the professional climbers. But the normal

travelers have their own story, they are unique and inspiring.

Thank you! Your submission has been received!
Oops! Something went wrong while submitting the form.
END_OF_DOCUMENT_TOKEN_TO_BE_REPLACED