As on Earth – and the moon and all worlds in our solar system – night on planet Saturn is made by Saturn’s own shadow. 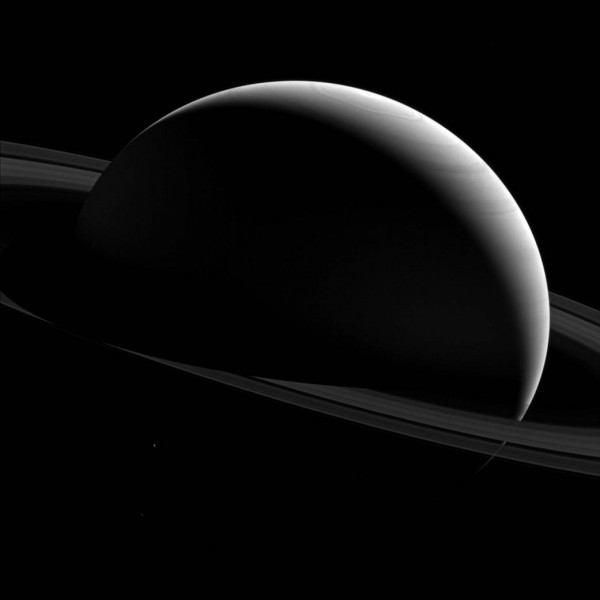 At times when the moon is a crescent, people frequently ask about Earth’s shadow on the moon. That’s misconception, of course. It’s the moon’s own shadow that creates a crescent moon. That fact comes home when you realize that no large body in space is near enough to Saturn to shadow it. Like a crescent moon, a crescent Saturn is created by having a perspective on the planet in which you see the planet’s own shadow, aka its night side. In this case, we got that perspective from the great Cassini spacecraft, which has been orbiting Saturn since 2004. NASA released this image of the night side of Saturn this week (September 14, 2015). Saturn’s moon Tethys is also in the image, barely seen in the lower left quadrant. NASA explained:

The night sides of Saturn and Tethys are dark places indeed.

We know that shadows are darker areas than sunlit areas, and in space, with no air to scatter the light, shadows can appear almost totally black.

Tethys (660 miles or 1,062 kilometers across) is … below the ring plane and has been brightened by a factor of three to increase its visibility.

The wavy outline of Saturn’s polar hexagon is visible at top center.

This view looks toward the sunlit side of the rings from about 10 degrees above the ring plane. The image was taken with the Cassini spacecraft wide-angle camera on Jan. 15, 2015 using a spectral filter which preferentially admits wavelengths of near-infrared light centered at 752 nanometers.

The view was obtained at a distance of approximately 1.5 million miles (2.4 million kilometers) from Saturn. Image scale is 88 miles (141 kilometers) per pixel.

Bottom line: Cassini spacecraft image of the night sides of Saturn and its small moon Tethys.