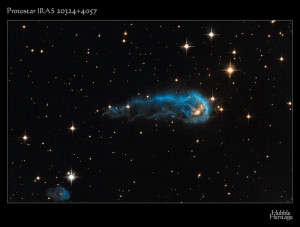 View larger. | This is IRAS 20324+4057. It’s a protostar, or star in the process of being formed. The long tail streaming behind it is a light-year long. The tail is there because this protostar is being blasted by ultraviolet radiation from nearby massive, hot stars.

Thank you! Your submission has been received!
Oops! Something went wrong while submitting the form.
END_OF_DOCUMENT_TOKEN_TO_BE_REPLACED