Hot, bright stars generate harsh stellar winds that are blast ultraviolet radiation toward a protostar, sculpting it into the light-year-long shape seen here. 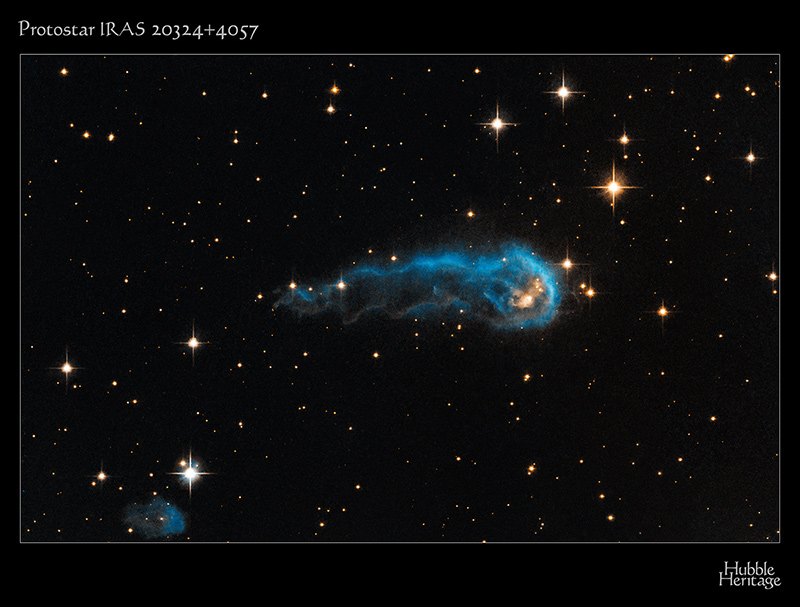 View larger. | This is IRAS 20324+4057. It’s a protostar, or star in the process of being formed, in this case stretched out about a light-year long. The reason? Nearby hot, bright stars are blasting it with ultraviolet radiation. Image via NASA, ESA, the Hubble Heritage Team (STScI/AURA), and IPHAS

This object isn’t a star, but it will be someday. For now, it’s just a knot of gas and dust in space, a protostar, located some 4,500 light-years away in the direction of our constellation Cygnus the Swan. A star is forming here, still gathering materials from the interstellar medium, and collapsing as it spins in space. In the case of this object – called IRAS 20324+4057 – the protostar has been stretched to a long, thin shape about a light-year long.

What’s causing this newly forming star to stretch out in space? The answer isn’t shown on the photo. There are 65 of the hottest, brightest known stars – classified as O-type stars – located 15 light-years away from the protostar. You see a few of these hot, bright stars on the right edge of the image. These stars, along with 500 less bright, but still highly luminous B-type stars make up what is called the Cygnus OB2 association. Collectively, the association is thought to have a mass more than 30,000 times that of our sun.

These hot, bright stars generate harsh stellar winds that are blasting ultraviolet radiation toward this protostar. These winds are sculpting the gas and dust into the light-year-long shape captured in this image.

By the way, this image of IRAS 20324+4057 is a composite of Hubble Advanced Camera for Surveys data taken in green and infrared light in 2006, and ground-based hydrogen data from the Isaac Newton Telescope in 2003, as part of the INT Photometric H-alpha Survey (IPHAS).

Will IRAS 20324+4057 be able to form a star? Read the full story from the Hubble Heritage Project.