A new earthrise photo, as seen from the moon by the Lunar Reconnaissance Orbiter. 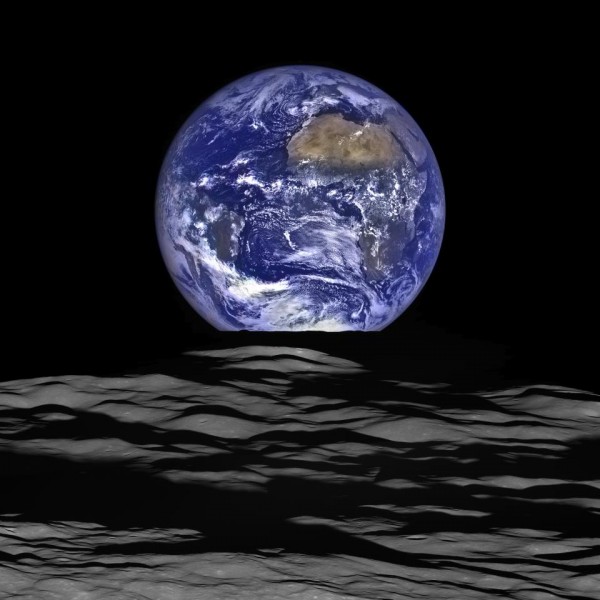 View larger. | Spectacular new image of earthrise seen from the moon, from NASA’s Lunar Reconnaissance Orbiter using cameras operated by Arizona State University. Africa, the south Atlantic Ocean and the eastern edge of South America can be seen. The large tan area on the upper right is the Sahara Desert. In the foreground on the moon, you are seeing the Compton crater. Read more about this image.

As seen from any one spot on the moon’s surface, Earth never rises or sets. Because one side of the moon always faces Earth, the Earth hangs relatively motionless in the lunar sky. But orbiting spacecraft can see earthrises and earthsets. This week, Arizona State University emailed us this amazing new image of an earthrise seen from the moon, along with Q-and-A with Mark Robinson, who is the principal investigator for the cameras aboard NASA’s Lunar Reconnissance Orbiter. In it, Robinson talked about this image, which was acquired by the orbiter’s camera (the LROC) in October.

Q: How did you know this image would be possible?

A: [The LROC has] taken pictures of the Earth more than 10 times in the past. We wanted to get a limb shot (showing the edge of the moon). What makes it really hard is getting the moon in the foreground … That was not by accident. We have software tools that allow us to visualize observations. We know where the spacecraft is going to be in the future … We determined from which orbits the Earth will be visible near the limb. Once we know the ground track where the Earth will be visible, we then find a view with a dramatic foreground.

Question: What are some of the pieces that had to come together to make this photo?

Answer: Just a few of the steps: You have to roll the spacecraft, in this case about 70 degrees, but the spacecraft is traveling at over 1,600 meters per second. We’re restricted in the length of one exposure time to something close to 0.4 milliseconds. You also move the spacecraft in the direction of flight so that you can get a wide enough field of view. When a spacecraft is in an elliptical orbit, the timing changes from image-to-image in an orbit. We have to compute all of that beforehand to get it exactly right … That timing has to be precisely carried out … We have to predict the temperature of the CCD (electronic equivalent of film). The Wide Angle Camera (WAC) is imaging an area multiple times while the Narrow Angle Cameras (NAC) takes just one picture. We blow up the WAC images and combine them to produce higher resolution, and then overlay this sharper image on the NAC image. We wanted the Earth to be on the horizon, and that only happens from certain areas of the moon. It’s only when the spacecraft is above the boundary between the nearside and farside that you can see the Earth behind the limb (edge of the moon).

Q: LRO has been in orbit for more than six years. If you picked the best shots to show your friends, what are they?

A: We’ve taken more than a million images. My answer changes every three days. The Apollo landing sites are fantastic. You can see the tracks the astronauts left on the surface of the moon. To me, as a scientist, it’s really great because it helps me visualize the photographs they took on the surface. The significance of the geologic context. ‘All right, now I know they got that soil sample there, and I can see what it looks like.’