Nearby galaxy in Triangulum

This face-on spiral galaxy – Messier 33 aka M33 – is the second-closest spiral to our Milky Way at 3 million light-years away. 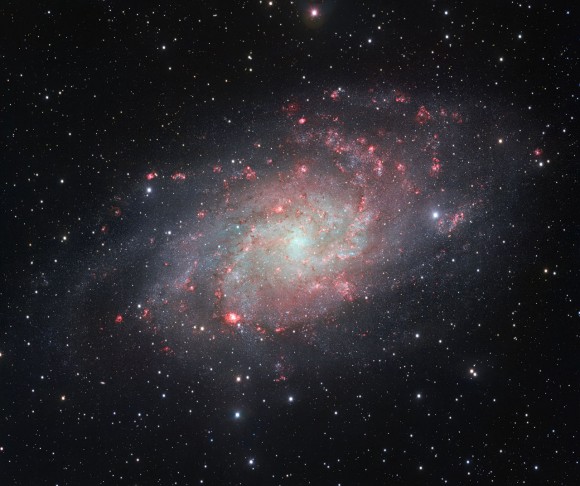 Triangulum Galaxy, aka Messier 33, via ESO

One of the galaxies that starts coming into view at this time of year – for the Northern Hemisphere – is this one. It’s Messier 33, often called the Triangulum Galaxy. This nearby spiral is the second-closest large galaxy to our own Milky Way. It’s packed with bright star clusters and clouds of gas and dust. The VLT Survey Telescope (VST) in Chile captured this beautifully detailed image of the galaxy Messier 33 in 2014. The astronomers who captured it said it was …

… the most detailed wide-field views of this object ever taken and shows the many glowing red gas clouds in the spiral arms with particular clarity.

Messier 33 is located about three million light-years away in the small northern constellation of Triangulum (The Triangle). It was observed by the French comet hunter Charles Messier in August 1764, who listed it as number 33 in his famous list of prominent nebulae and star clusters. However, he was not the first to record the spiral galaxy; it was probably first documented by the Sicilian astronomer Giovanni Battista Hodierna around 100 years earlier.

Want to see Messier 33? It’s tough to spot with the eye alone, but some have done it, when sky conditions are ideal. Learn how to find M33 here.