Moon in front of Earth 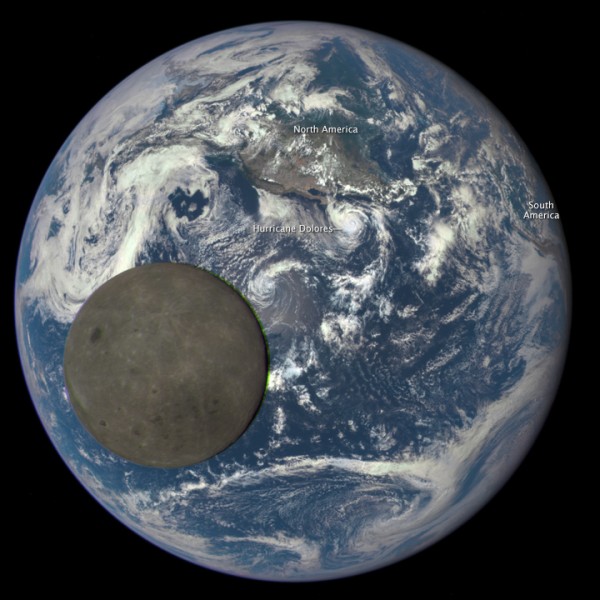 Moon transits in front of the sunlit face of Earth, as seen by the DSCOVR satellite on July 15, 2015.

NASA calls this image The Dark Side and the Bright Side, but that’s really a play on the erroneous notion of a permanent lunar dark side. Many EarthSky readers understand that the moon has no permanent dark side. All sides of the moon do experience day and night, just as Earth does … only more slowly, since the moon takes about a month to rotate once on its axis.

Also, in this image, there’s nothing dark except space itself. Both the Earth and moon are showing us their illuminated daysides. How did NASA capture this? It wrote:

The images were acquired by the Earth Polychromatic Imaging Camera (EPIC) on the DSCOVR satellite, which orbits about 1.6 million kilometers (1 million miles) from Earth. EPIC maintains a constant view of the fully illuminated Earth as it rotates. About twice a year the camera captures images of the moon and Earth together as the orbit of DSCOVR crosses the orbital plane of the moon.

Want more? Here’s a video of the capture:

And check out the image below, where some of the features on the lunar far side are labeled.

By the way, no one on Earth had ever seen the far side of the moon until in 1959, when the Soviet Luna 3 spacecraft returned the first images.

Since then, several missions by NASA and other space agencies have imaged the lunar far side. 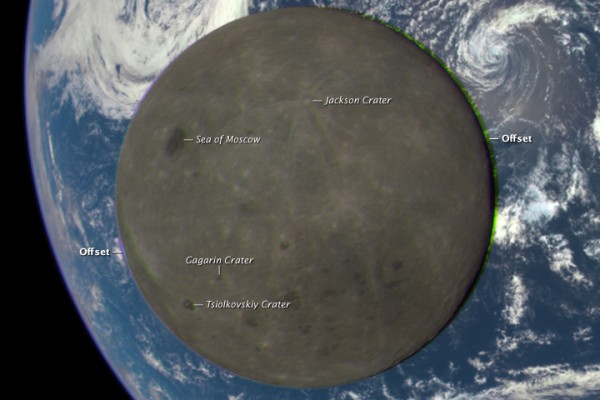 Named features on the far side of the moon, sit transits Earth in July, 2015. Image via NASA’s DSCOVR satellite.

Bottom line: This image is NASA’s 2016 Tournament Earth champion. It’s the moon transiting in front of the Earth – both with their daysides visible – in July, 2015.