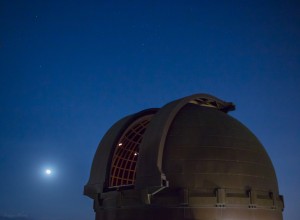 While waiting in line to use the telescope Friday night, I caught this picture of the moon behind the Zeiss telescope dome at the Griffith Observatory. It was crowded but it was nice to see so many people taking an interest in the Cosmos!
Equipment Details Canon 6D 35mm

Thank you! Your submission has been received!
Oops! Something went wrong while submitting the form.
END_OF_DOCUMENT_TOKEN_TO_BE_REPLACED