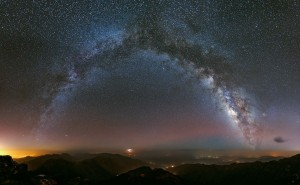 Besancon Arnaud submitted this composite panoramic photo – composed of 60 images – of the Milky Way over Morocco at the top of Toubkal, a mountain peak in southwestern Morocco, located in the Toubkal National Park. At 4,167 meters, this point is the highest peak in North Africa.

Thank you! Your submission has been received!
Oops! Something went wrong while submitting the form.
END_OF_DOCUMENT_TOKEN_TO_BE_REPLACED