Another good reason to grab that window seat! Colin Legg captured this great photo of a meteor shower, seen from an airplane window. 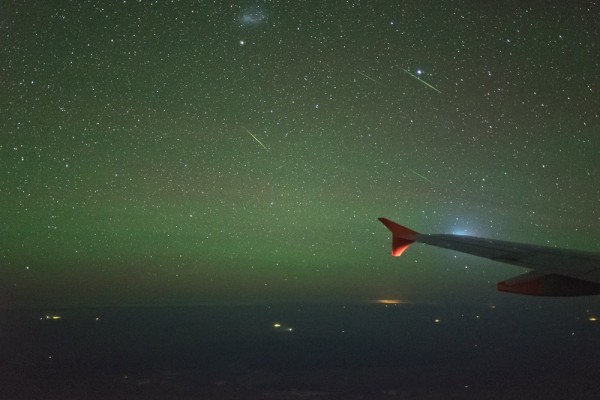 Leave it to Colin Legg – one of the most amazing sky photographers we know – to catch a meteor shower from the window seat of an airplane. Colin wrote to EarthSky:

I had another go at night shots out the plane window … this time under very dark no moon conditions. Most of the flight was bumpy due to cold fronts, but things calmed down once we crossed the Western Australia coastline. I fired off a 20-minute burst of 1-second exposures, shielding the camera from cabin lights under a black hood.

Apologies for the excessive noise. Due to plane motion and minor turbulence, I couldn’t expose for much longer than 1 second and keep the stars sharp. Notwithstanding, it is quite amazing that modern day cameras can capture so much detail in 1 second on a no moon night.