Mount Rainier, the Milky Way and a Perseid meteor! Plus a look forward to April’s Lyrid meteor shower. 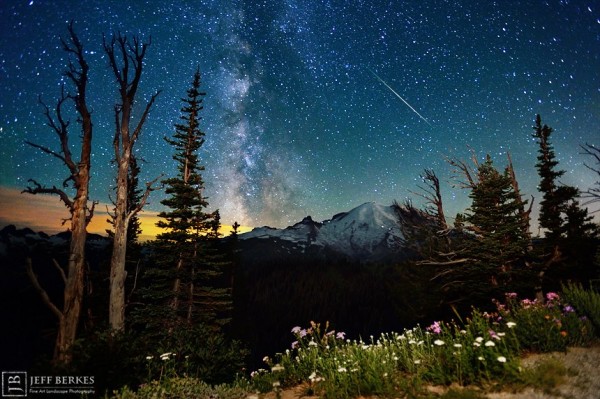 There’s always a lull in major meteor showers between the January Quadrantids and the April’s Lyrid meteor shower. While you’re waiting for the next shower, check out this beautiful shot that Jeff Berkes submitted to EarthSky Facebook and get details on the Lyrids to boot! Jeff wrote:

Mount Rainier, the Milky Way and a Perseid meteor!

I snapped this picture from Mt. Rainier National Park a few years back and it’s one of my personal favorites. This was taken during the height of the Perseid meteor shower where up to 120 meteors per hour can be seen from dark sky locations in early-mid August. The light pollution in the far distance is from Portland, Oregon.

I’m looking forward to the first ‘favorable’ meteor shower of 2015, the Lyrids. They come in mid-April. The Lyrids don’t have the highest rates, but they often spawn some incredible fireballs that can been seen at night as well as during the day!

You have a little more than 1 month to prepare for the Lyrids! Find a nice dark sky between April 20th – 22nd and look up! Be patient and give yourself a couple of hours outside, the weather is getting warmer the best time to look is between 1 a.m. and sunrise local time!

Thanks for the photo and Lyrid reminder, Jeff! We all want to move to Oregon now.