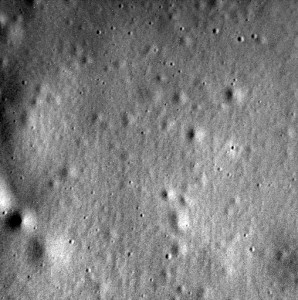 Originally planned to orbit Mercury for one year, the mission exceeded all expectations, lasting for over four years and acquiring extensive datasets with its seven scientific instruments and radio science investigation. This afternoon, the spacecraft succumbed to the pull of solar gravity and impacted Mercury’s surface. The image shown here is the last one acquired and transmitted back to Earth by the mission. The image is located within the floor of the 93-kilometer-diameter crater Jokai. The spacecraft struck the planet just north of Shakespeare basin.

As the first spacecraft ever to orbit Mercury, MESSENGER revolutionized our understanding of the Solar System’s innermost planet, as well as accomplished technological firsts that made the mission possible. Check out these movies of the Top 10 Science Results and the Top 10 Technology Innovations from the mission.

Thank you! Your submission has been received!
Oops! Something went wrong while submitting the form.
END_OF_DOCUMENT_TOKEN_TO_BE_REPLACED