Mercury and the Pleiades

The elusive planet Mercury and the lovely Seven Sisters are low in the west after sunset now. Watch for them. 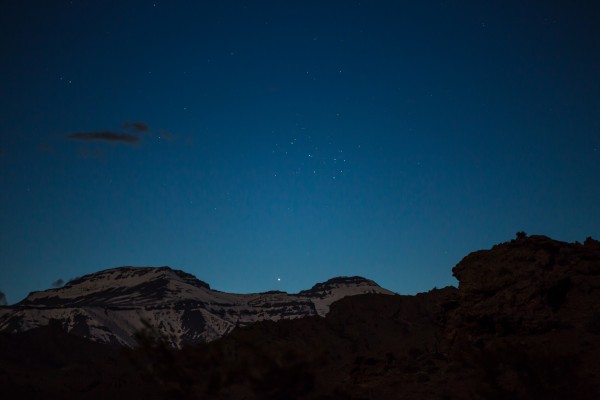 View larger. | Mercury is just above the ridge in this photo, and the Pleiades is the little dipper-shaped star cluster above Mercury. Photo taken just outside Yellowstone National Park by Jack Webb.

Our sun’s innermost planet, Mercury, and the distant star cluster Pleiades are now low in the west after sunset. They’re just above the place where the sun went down. They are easier to see from the Northern Hemisphere than the Southern, because the ecliptic – or path of the sun, moon and planets – makes a steep angle now with the western horizon in the evening. The steep angle of the ecliptic (from Northern Hemisphere locations) places Mercury above the sunset glare.

Look for them early, because Mercury and the Pleiades will sink below the western horizon by nightfall or early evening. They are beautiful. You will love seeing them!

Read more about Mercury and the Pleiades 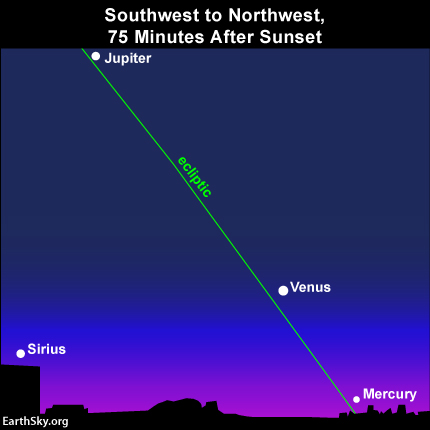 An imaginary line from the bright planet Jupiter and through the even-brighter planet Venus helps you to locate the planet Mercury near the horizon. Be sure to look early because Mercury will soon follow the sun below the western horizon. The green line depicts the ecliptic. The dipper-shaped Pleiades will be near Mercury.

Bottom line: The elusive planet Mercury and the lovely Seven Sisters low in the west after sunset. Photo by Jack Webb.