Mercury and more before dawn

Ken Christison caught Mercury in the east before dawn this week. He couldn’t see it with the eye that day, but you might see it, if you look. Here’s how. 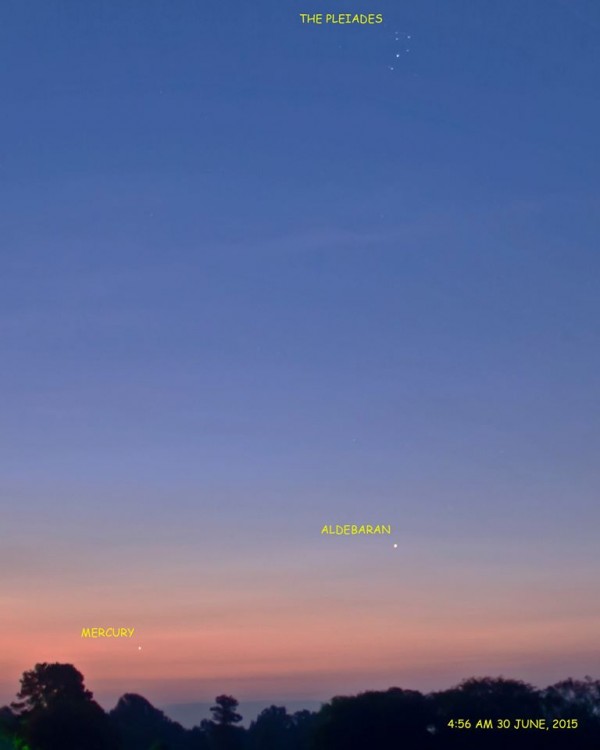 Ken Christison posted this photo to EarthSky Facebook. He wrote:

l was thrilled to see that I caught Mercury, Aldebaran and the Pleiades in a frame this morning, despite not seeing any of them with the naked eye or through the viewfinder.

Another great example of the advantages of shooting RAW.

Mercury is the innermost planet in our solar system, and it’s often obscured by the sun’s glare or – as might be the case in Ken’s photo – any haziness low in the sky. You do have a chance to see Mercury with the eye alone before dawn in the coming week – first week of July 2015 – and you might catch the nearby star Aldebaran in the constellation Taurus the Bull, too.

The Southern Hemisphere has the advantage for viewing this particular apparition of Mercury (and also Aldebaran) in the morning sky.

No matter where you live, it’ll be to your advantage to find an unobstructed horizon in the direction of sunrise. Binoculars will come in handy as well – especially at more northerly latitudes.

As the days pass during July, Aldebaran will be rising higher in the eastern sky before dawn, but Mercury will be sinking toward the sunrise glare. By the time the waning crescent moon sweeps through – on the mornings of July 12, 13 and 14 – Mercury will be difficult if not impossible to see. 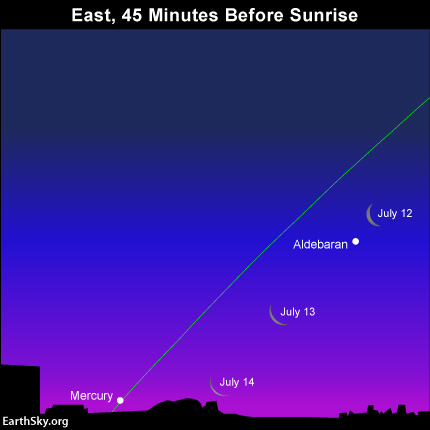 It shouldn’t be too difficult to catch the waning crescent moon near the star Aldebaran on these mornings – July 12-14, 2015 – but it’ll be a challenge to catch the lunar crescent with the planet Mercury. The green line depicts the ecliptic – the sun’s path across our sky. Read more.

Bottom line: A photo by Ken Christison of the sun’s innermost planet, Mercury, before dawn on June 30, 2015. How to see Mercury around now, in the east before dawn.