After making the steep-ever climb of any rover on Mars, Opportunity looked back along its own tracks toward a swirling Martian dust devil in the valley below. 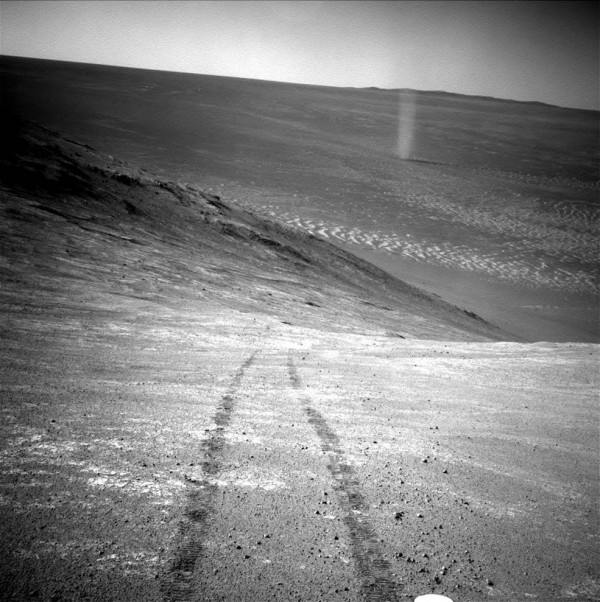 View larger. | From high on a ridge, NASA’s Mars rover Opportunity recorded this image of a swirling Martian dust devil on March 31. Image via NASA/JPL-Caltech.

During its recent uphill drive to the top of Knudsen Ridge on Mars, the tilt of the Mars Opportunity rover reached 32 degrees, the steepest-ever for any rover on Mars. In this image – taken on March 31, 2016, the 4,332nd Martian day, or sol, of the rover’s work on Mars – you’re looking backwards along the rover’s tracks, with its camera aimed toward a dust devil twisting through the valley below.

In the image, the rover – which was launched from Earth in 2003 – has just climbed the north-facing slope of Knudsen Ridge on Mars. The ridge forms part of the southern edge of Marathon Valley.

Why is NASA’s image in black and white, by the way? It’s because it was taken with the Navcam on Opportunity, a camera that’s essential for enabling the rover to make its way across the surface of this alien world … but which doesn’t have a color camera.

Look below to see how artist Don Davis remedied the lack of color with some processing here on Earth: 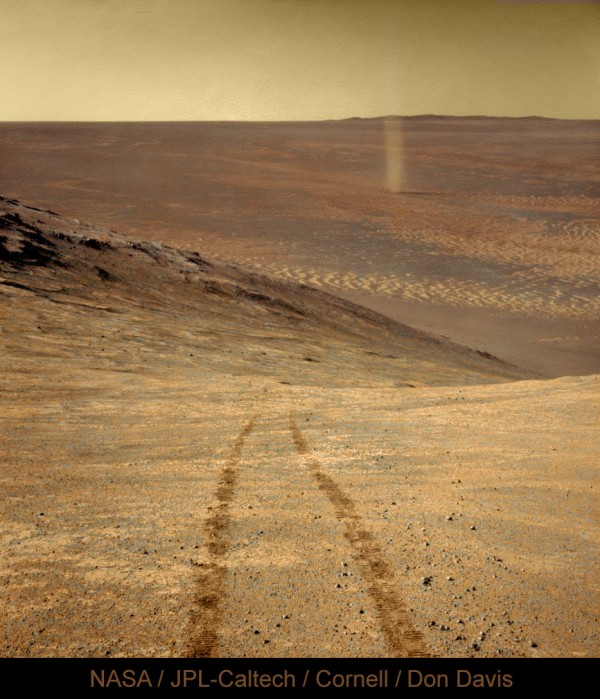 Dust devils were a common sight for Opportunity’s twin rover, Spirit, in its outpost at Gusev Crater, but Opportunity has seen them only rarely.

Just as on Earth, a dust devil is created by a rising, rotating column of hot air. When the column whirls fast enough, it picks up tiny grains of dust from the ground, making the vortex visible. 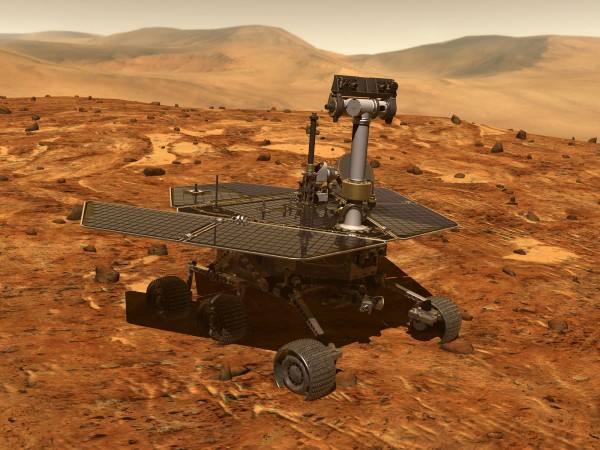 Artist’s concept of the rover Opportunity on Mars. This rover – and its twin rover Spirit – were launched from Earth in 2003. Image via NASA

Bottom line: Mars Opportunity rover image of a dust devil, from a perch on Knudsen Ridge on Mars, part of the southern edge of Marathon Valley, acquired on March 31, 2016, the 4,332nd Martian day, or sol, of the rover’s work on Mars.