The planet Mars with the stars Spica, Arcturus and the Plough – or Big Dipper – over the northern coast of Northern Ireland. Mars is now at its best! 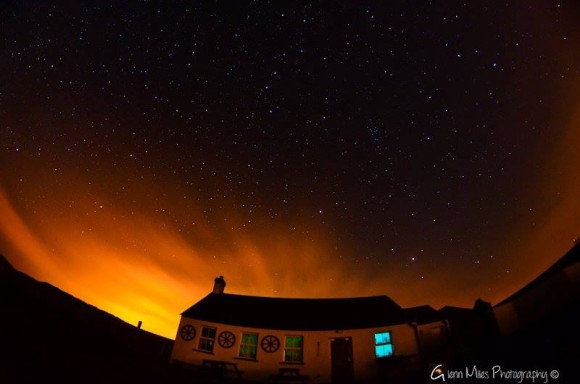 Glenn Miles captured this image of the Big Dipper, stars Arcturus and Spica, and the planet Mars this week. Mars is the planet to watch! It’s brighter now in our sky than it has been for two years. Earth will pass between Mars and the sun on April 8. Glenn wrote:

I captured this image late last night under clear skies over the north coast of Northern Ireland before a blanket of cloud came over and covered everything.

In this photo, the Big Dipper – known as the Plough in the U.K. or, in Hindu astronomy Saptarishi, after the seven rishis – is in the upper middle of the photo. See it? Follow the curve in the Dipper’s handle to arc to the bright star Arcturus above the house and the brighter planet Mars to the upper right of the house. The chart below shows you how. In Glenn’s photo, Mars is the brighter of two “stars” near the horizon. The other star is Spica, the brightest star in the constellation Virgo the Maiden. 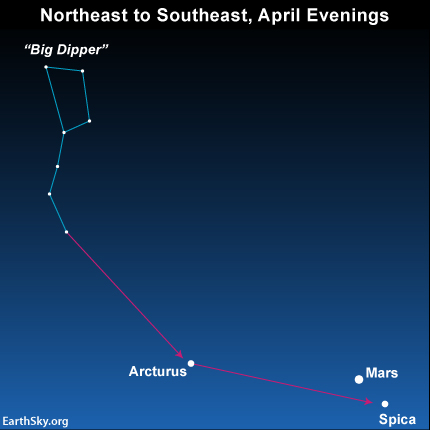 Extend the Big Dipper handle to arc to the star Arcturus, spike the star Spica – and, in 2014, locate the red planet Mars. Read a preview of our April 4 program

Have you ever wanted to find the Big Dipper but just couldn’t spot this famous pattern? Here’s everything you need to know

Here’s more about locating the star Arcturus, using the Big Dipper as a guide.

Here’s more about the red planet Mars, now at its best for this two-year period: Follow the arc to Arcturus … and Mars