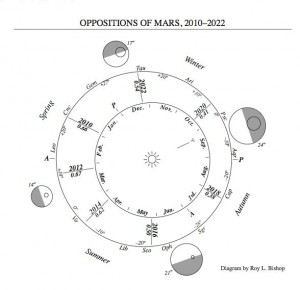 Why is Mars sometimes bright and sometimes faint?

The above diagram represents the orbits of Earth and Mars as viewed from the north ecliptic pole. Straight lines link simultaneous positions of the two planets for seven successive oppositions of Mars, beginning with that of the year 2010. The separation of the two planets (in astronomical units) at the various oppositions is indicated beside each of the connecting lines. The months inside of Earth’s orbit indicate the position of Earth during the year (both planets orbit counterclockwise). For each orbit, two tick marks labelled A and P indicate the aphelion point and the perihelion point, respectively. The direction of the vernal equinox is shown (toward the late-September position of Earth). Around the orbit of Mars is indicated its declination (ranges between +27° and ?28°) and the constellation in which Mars resides when at opposition.
Four views of Mars are shown: at its two equinoxes and two solstices. These views show the portion of Mars illuminated by the Sun, the location and approximate size of its north polar cap, and the apparent size of Mars (labelled in arcseconds) for oppositions occurring at these points in its orbit. The seasons of the Martian northern hemisphere are indicated around the outer margin of the diagram, and are very nearly one season ahead of those on Earth at the same orbital position. (For the southern hemisphere of Mars, the season and the configuration of the south polar cap are the same as those of the diametrically opposite view.) Note that the maximum angular diameter Mars can attain (25?) occurs near its perihelion, at a late-August opposition.
As an example of the information that can be read from this diagram: the 2016 opposition of Mars will occur in late May with Mars located near declination –21° in the constellation Scorpius, 0.50 au from Earth, and about 19? in diameter. It will be late summer in the Martian northern hemisphere and the south polar cap might be more visible than the north polar cap.

Thank you! Your submission has been received!
Oops! Something went wrong while submitting the form.
END_OF_DOCUMENT_TOKEN_TO_BE_REPLACED