ESA’s Mars Express orbiter image of a region of the planet Mars’ northern hemisphere named after Hephaestus, the Greek god of fire. 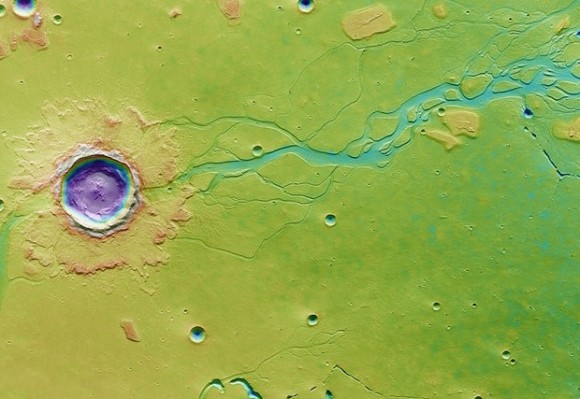 Large and small, hundreds of thousands of craters scar the surface of Mars, hollowed out by a multitude of asteroids and comets that impacted the Red Planet throughout its history.

This image shows a region of the planet’s northern hemisphere known as Hephaestus Fossae – after the Greek god of fire – that was imaged by the high-resolution stereo camera on ESA’s Mars Express orbiter on 28 December 2007.

The image has been colored to indicate the elevation of the terrain: green and yellow shades represent shallow ground, while blue and purple stand for deep depressions, down to about 4 km.

Scattered across the scene are a few dozen impact craters that cover a wide range of sizes, with the largest boasting a diameter of around 20 km.

The long and intricate canyon-like features that resemble riverbeds are the phenomenal aftermath of the same fierce impacts that created the largest craters.
When a small body such as a comet or an asteroid crashes at high speed into another object in the solar system, the collision dramatically heats up the surface at the impact site.

In the case of the large crater seen in this image, the heat produced by such a powerful smash melted the soil – a mixture of rock, dust and also, hidden deep down, water ice – resulting in a massive overflow that flooded the surrounding environment. Before drying up, this muddy fluid carved a complex pattern of channels while making its way across the planet’s surface.

The melted rock–ice mixture also gave rise to the fluidized appearance of the debris blankets surrounding the largest crater.

Based on the lack of similar structures near the small craters in this image, scientists believe that only the most powerful impacts – those responsible for forging the largest craters – were able to dig deep enough to release part of the frozen reservoir of water lying beneath the surface.