It’s time for Manhattanhenge in NYC

Each year around May 29 and 30 – and again in early July – New Yorkers watch for Manhattanhenge, an alignment of the sunset along city streets. Fun! 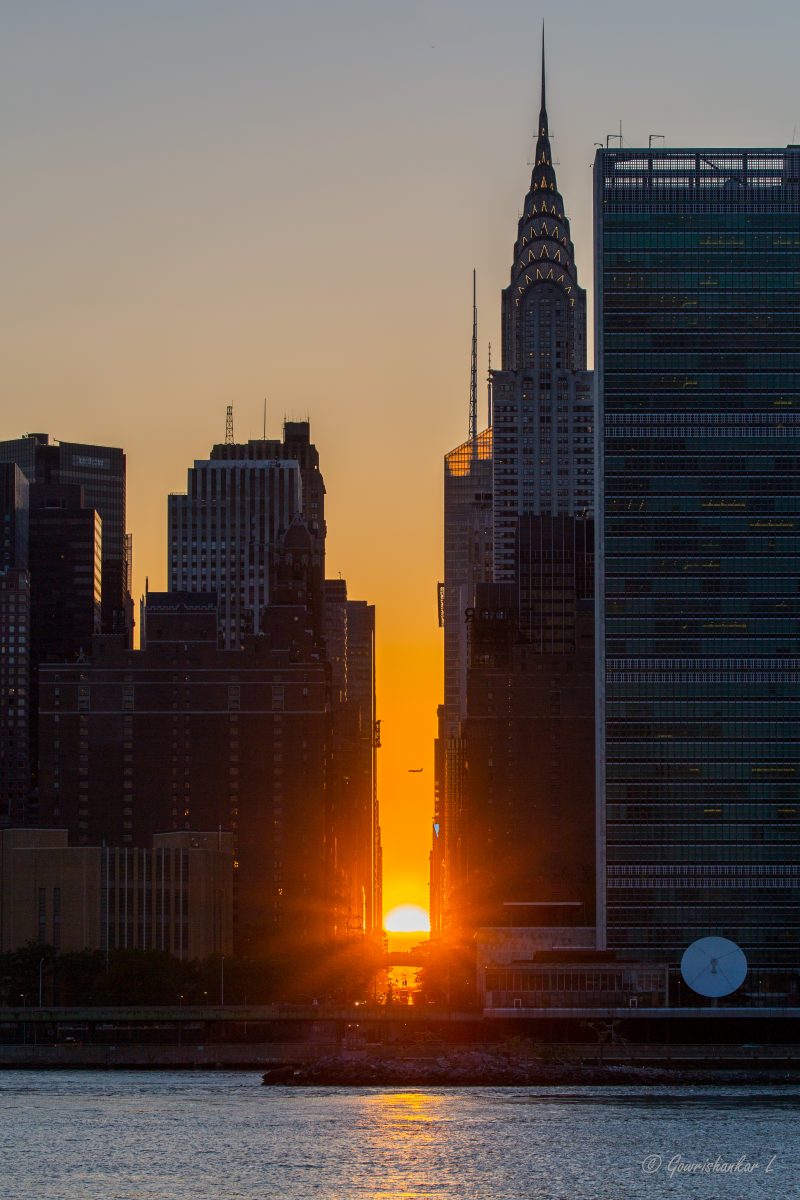 Manhattanhenge. This is a 3-image composite to preserve the disk of the sun and also shadow details of the surroundings. Gowrishankar Lakshminarayanan was in Gantry Plaza State Park, Queens, New York, looking straight through 42nd Street, with the Chrysler building to the right, on June 1, 2017.

Every year around May 29 and 30 – and again for a day or two around July 12 – people in New York City look forward to Manhattanhenge. It’s a phenomenon where the sunset aligns perfectly with the streets of Manhattan, particularly along 42nd, 34th and 14th Streets. It happens twice every year – around the end of May and early July. May 29th and 30th are the most talked-about dates in media, but – as the photo above by Gowrishankar Lakshminarayanan shows, you don’t have to look precisely May 29 and 30. He captured the image above on June 1, 2017.

The phenomenon of Manhattanhenge is fun, one of similar alignments that occur around the world on various dates. Think Stonehenge at the equinoxes and solstices. The point of sunset along the horizon varies throughout the year. At this time of year – between the March equinox and June solstice – the sunset point is shifting northward each day on the horizon, as seen from around the globe. It’s the northward-shifting path of the sun that gives us summer in the Northern Hemisphere and winter in the Southern Hemisphere. And it’s the shifting path of the sun that gives people various alignments of the sunset with familiar landmarks.

We heard that 2018’s Manhattenhenge was obscured by clouds. Today’s forecast today for NYC calls for mostly cloudy skies, too, with severe storms possible. That’s easy to believe after night before last’s lightning show over NYC. Still, if the skies clear at just the right time, there could be some dramatic photo opportunities!

Read more: Manhattanhenge 2019: When and where to watch 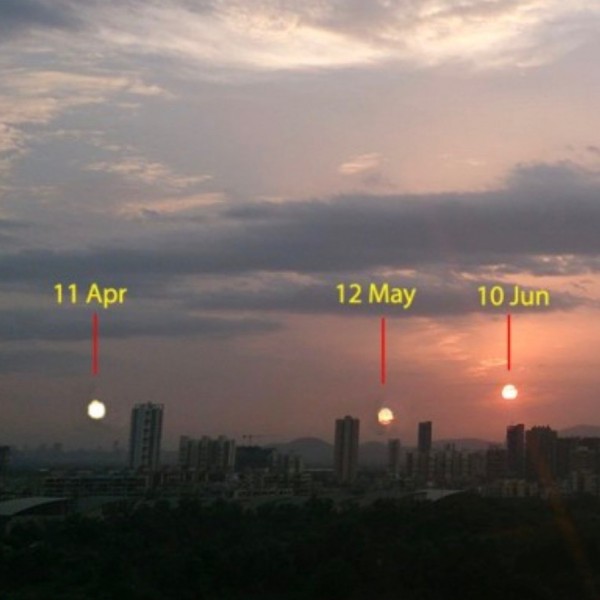 Abhijit Juvekar in Dombivli, India, created this composite image of sunsets over a period of months, to show that the sun sets progressively farther north in the months leading up to the June solstice.

The June solstice on June 21 will bring the sun’s northernmost point in our sky and northernmost sunset. Afterwards the sun’s path in our sky, and the sunset point, will both start shifting southward again. As for the sun’s alignment with the city of New York, and the streets of Manhattan Island … well, thank the original planners of this city. Scientific American explained:

The phenomenon is based on a design for Manhattan outlined in The Commissioners’ Plan of 1811 for a rectilinear grid, or “gridiron” of straight streets and avenues that intersect one another at right angles. This design runs from north of Houston Street in Lower Manhattan to just south of 155th Street in Upper Manhattan. Most cross streets in between were arranged in a regular right-angled grid that was tilted 29 degrees east of true north to roughly replicate the angle of the island of Manhattan.

And because of this 29-degree tilt in the grid, the magic moment of the setting sun aligning with Manhattan’s cross streets does not coincide with the June solstice but rather with specific dates in late May and early July.

Read more about Manhattanhenge from ScientificAmerican.com

Bottom line: Each year on May 29 and 30, New Yorkers watch for Manhattanhenge. Here’s what causes it.