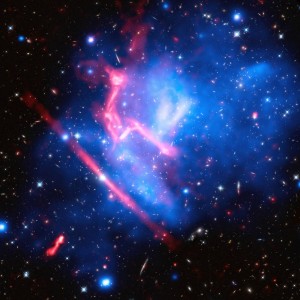 These two galaxy clusters are part of the “Frontier Fields” project, which uses some of the world’s most powerful telescopes to study these giant structures with long observations. Galaxy clusters are enormous collections of hundreds or thousands of galaxies and vast reservoirs of hot gas embedded in massive clouds of dark matter. These images contain X-ray data from Chandra (blue), optical light from Hubble (red, green, and blue), and radio data from the Very Large Array (pink).

Thank you! Your submission has been received!
Oops! Something went wrong while submitting the form.
END_OF_DOCUMENT_TOKEN_TO_BE_REPLACED