Looking toward the Milky Way’s center 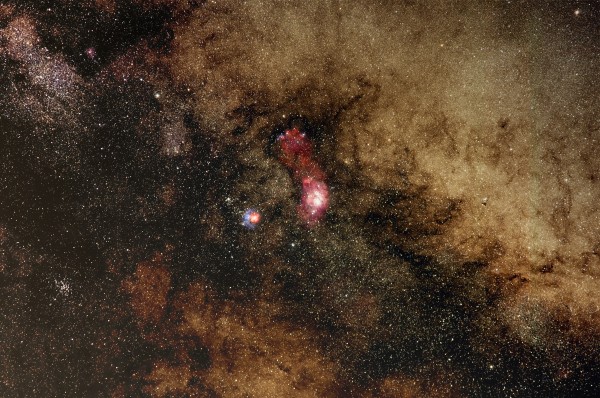 View larger. | Looking in the direction to the center of our Milky Way galaxy. Photo by Max Corneau

Max Corneau captured this image of what is called the Sagittarius Triplet. It consists of two nebulae (M8 and 20) and a star cluster (M21). He wrote:

I adore summer astronomy. When I was a young boy, my dad and I spent the cool Rhode Island nights at the seashore fishing. I did not realize, and never thought to ask why there was always a big ‘cloud’ in the sky. Now I know because that’s our home and I study it every chance I get. The billions of individual suns in our home galaxy blend their light into a soft glow that is easily mistaken for a cloud reflecting city lights that belies the existence of our galactic downtown. We live in the suburbs, on a minor arm named after Orion.

Hang on because here comes the Cosmic Perspective. This photo is a deep widefield nightscape, which means you see deep into the past (15,000 years) of our night sky across a wide vista.

Just how big is this stuff? Realize that our moon is about a light-second away, and the sun about eight light-minutes distant (the time it takes light to travel). The farther an object, the smaller its apparent size. The primary objects in the center of this image, near our galactic bulge, are about 820 trillion times further than our moon, yet these objects still appear very large. The extended Lagoon nebula (Messier 8, or M8) in the center is about 100 light-years from end to end. This cloud of gas and dust is huge; in fact, it is 271,885,132,005 times larger than the diameter of our moon!

Near the center of the image, the Trifid Nebula (Messier 20, or M20, first cataloged by the 18th century French comet hunter, Charles Messier) is simultaneously emitting and reflecting starlight, yielding dramatic reds and blues, respectively. Traveling downward out of the Lagoon takes you to the iconic Cat’s Paw Nebula with its crisp red emission and a hint of blue reflection. The Cat’s Paw was discovered by William Herschel in 1837 with his famous speculum mirror telescope.

Finally, consider that the golden cloud uppermost right in the image. This is M21, a star cluster. It consists of hundreds of thousands of individual stars. These suns are packed so densely from our perspective that they glow as one coherent light.

We are like grains of sand on a beach looking out in wonderment on a vast ocean, only able to see the vastness with special tools.