The MESSENGER spacecraft is now dropping closer to Mercury, and long anticipated, super-close views of the planet are beginning to come in. 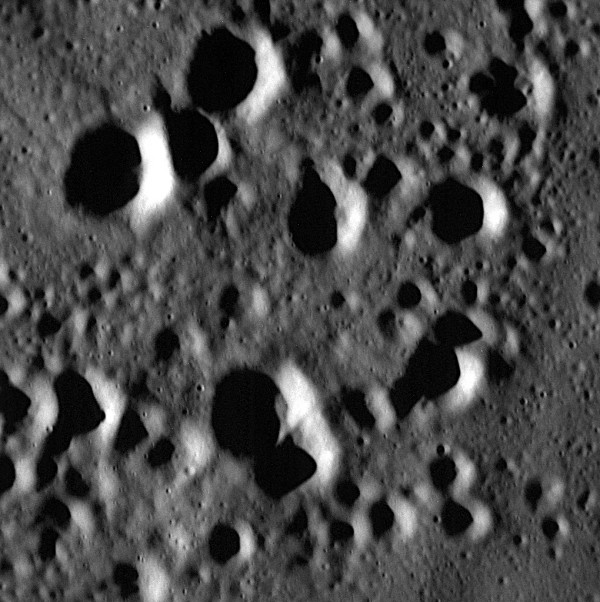 The image above is one of the highest resolution images ever returned of Mercury. MESSENGER acquired it on June 11, 2014. Last Friday – July 25, 2014 – MESSENGER’s periherm (closest point to Mercury) dropped below 100 kilometers / 62 miles. MESSSENGER is the first manmade object ever to come this close to Mercury.

On June 17 – around the time the image above was taken – the periherm had dropped to 113.80 kilometers / 70.80 miles. The image has absolutely incredible 2.90-meter resolution, showing a cluster of tiny secondary craters within the northern intercrater lava plains in a 3.00 kilometer / 1.86 mile wide area within Mercury’s North Polar Borealis Quadrangle.

The craters seen here are a few hundred meters at most in width, many much smaller. These are secondary craters from an impact out of this frame, where impact ejecta fell back on ballistic trajectories forming smaller craters. Many can be hundreds of kilometers away from the primary impact if the impact was large enough.

There are a handful of much smaller craters in the area too.

All of these craters in this image are of the simple bowl shaped type.

The image is a little ‘noisy’ due to the very short exposure required to prevent blurring of the image as MESSENGER was lower and faster than usual above the surface of Mercury.

The number of such high resolution and even higher resolution images will increase as periherm continues to lower.