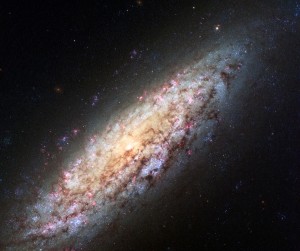 This NASA/ESA HUbble Space Telescope image shows galaxy NGC 6503. The galaxy, which lies 30 000 light-years away is at the edge of a strangely empty patch of space called the Local Void. This new image shows a very rich set of colours, adding to the detail seen in previous images.

Thank you! Your submission has been received!
Oops! Something went wrong while submitting the form.
END_OF_DOCUMENT_TOKEN_TO_BE_REPLACED