As winter comes to the far north, sky conditions may be just right to produce a beautiful light phenomenon called “light pillars.” 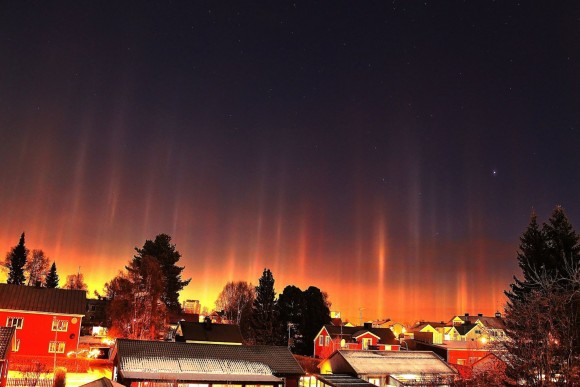 Sun pillars or light pillars are formed by reflection from hexagonal plate-like ice crystals in Earth’s air. These crystals drift through the atmosphere with a horizontal orientation, gently rocking from side to side as they fall. Diagram via University of Illinois.

EarthSky Facebook friend Birgit Bodén shared this photo. It’s a sign of wintry weather already appearing at far northern latitudes. These streaks in the sky are called light pillars. They form when sunlight (or another bright light source, such as the sun) reflects off the surfaces of millions of falling ice crystals associated with thin, high-level clouds, for example, cirrostratus clouds. The ice crystals have roughly horizontal faces. They are falling through Earth’s atmosphere, rocking slightly from side to side.

Light pillars can be seen at any time of night when sky conditions are just right.