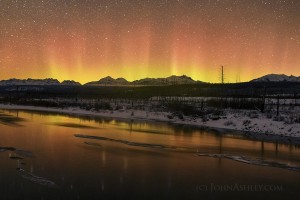 The photos were made 3 hours and 16 miles apart. The northern lights were photographed over Glacier Natl. Park at 01:18 from a Forest Service location (48.6084°N 114.1729°W) that is 6 miles west of Apgar and 6 miles south of Polebridge. The light pillars were photographed in Columbia Falls later that night at 04:33 on my way home to Kila. The mountains were mostly clear while the valley had tiny ice crystals drifting about.

Thank you! Your submission has been received!
Oops! Something went wrong while submitting the form.
END_OF_DOCUMENT_TOKEN_TO_BE_REPLACED