Light pillars and aurora over Montana 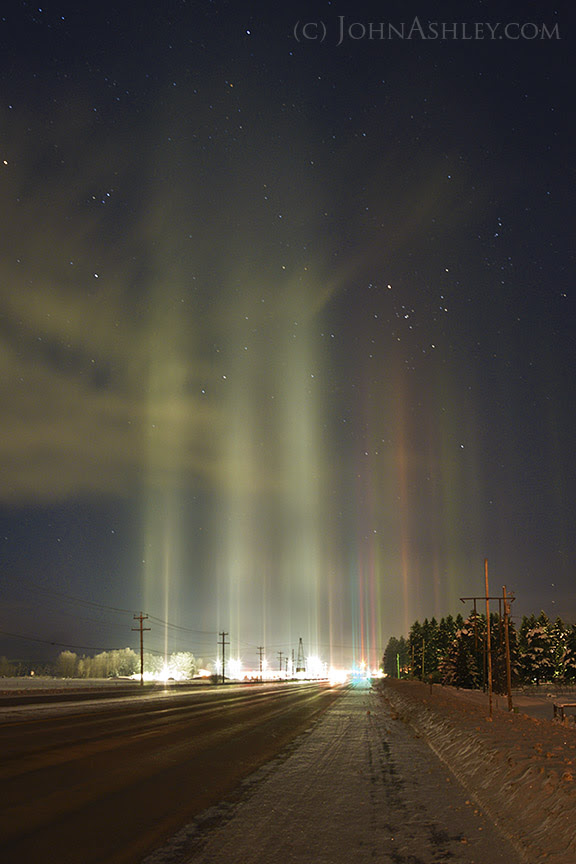 Light pillars above a gas station in Columbia Falls, Montana by John Ashley, January 3, 2016. He used a Nikon D750 to capture this image. Visit johnashleyfineart.com

John Ashley in northwestern Montana caught a beautiful display of light pillars (above) – after capturing an aurora earlier that night (below) – on January 3, 2016. He wrote:

Two very different pillars of light showed up to bookend my comet chasing trip during the wee hours this morning. Before Comet Catalina appeared, the northern lights rose over Glacier National Park and reflected nicely in the icy North Fork River, at a balmy minus 4 degrees Fahrenheit [-15 Celsius]. The aurora was visible for less than an hour, faint enough that I could not detect any color with my old eyes. Camera picked up yellow and magenta but none of our most common color, green.

On my 04:30 a.m. drive home, I just had to pull over and photograph the light pillars over a local gas station.

Columns of light apparently beaming directly upwards from unshielded (and wastefully polluting) lights are sometimes visible during very cold weather. Plate shaped ice crystals, normally only present in high clouds, float in the air close to the ground and their horizontal facets reflect light back downwards. The pillars are not physically over the lights or anywhere else in space for that matter ~ like all halos they are purely the collected light beams from all the millions of crystals which just happen to be reflecting light towards your eyes or camera. 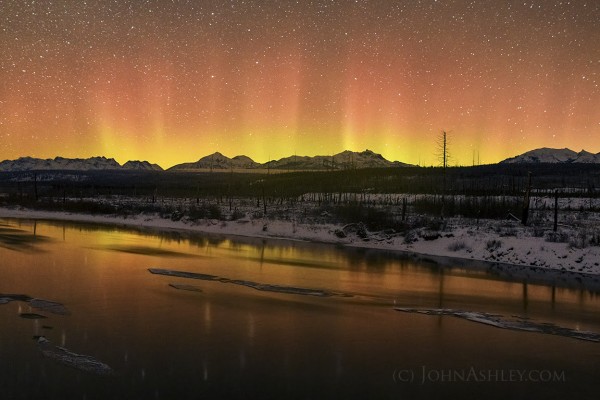