A liquid lake on Saturn’s moon 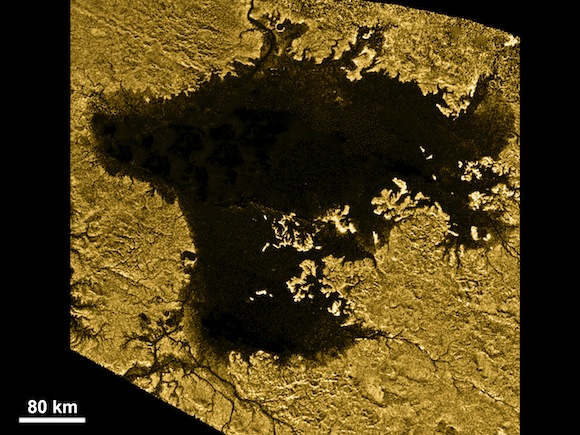 Ligeia Mare is one of the many bodies of liquid in and around the north polar region of Saturn’s largest moon, Titan. The lake is liquid, but the liquid isn’t water, which would freeze at Saturn’s distance from the sun. The temperature at Titan’s surface is about -289 degrees Fahrenheit (-178 degrees Celsius). Instead, the liquid in this Titan lake is mainly methane and ethane as well as other liquid hydrocarbons.

The lake’s name comes from one of the beautiful and dangerous sirens in Greek mythology, Ligeia. The sirens were said to sing so sweetly that passing sailors would shipwreck on the rocky coast of their island. 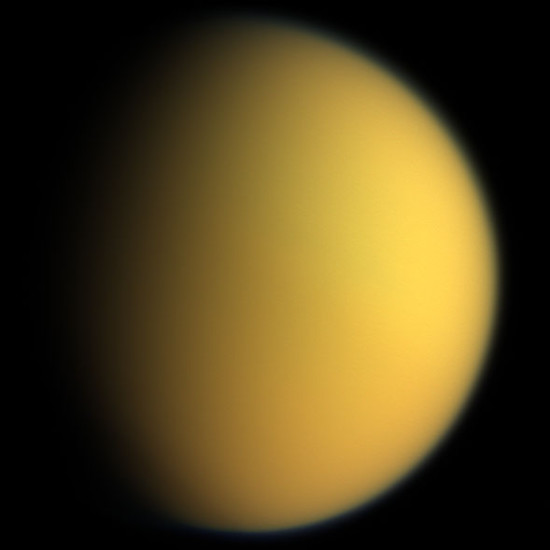 This image of Saturn’s largest moon Titan is from Cassini – taken in 2005. It shows approximately what Titan would look like to the human eye: a hazy orange globe surrounded by a tenuous, bluish haze. Titan has a very thick atmosphere that the eye can’t penetrate. The lakes on Titan are detected via Cassini’s radar. Image via NASA

The images on this page are just two of many amazing ones from NASA’s Cassini mission to Saturn. The spacecraft has been orbiting in and among Saturn’s rings and moons since 2004. Read more about the Cassini mission here.

Be sure to check out more EarthSky Today’s Images