Posted by Chris Comfort and Deborah Byrd in Today's Image | May 7, 2013 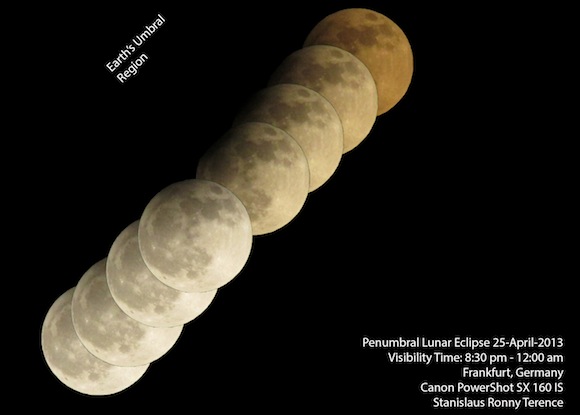 The April 25-26, 2013 lunar eclipse was a complete penumbral eclipse – and a very brief partial eclipse. Photograph by Stanislaus Ronny Terrance.

There are two more lunar eclipses later this year, but both are penumbral only. During the April 25-26 eclipse, Earth’s dark umbral shadow was located mostly to one side of the moon, as shown in the photo above. That was the last time Earth’s umbral shadow will touch the moon’s face until the total lunar eclipse of April 15, 2014.

Earth’s shadow has two parts: a dark inner umbra and lighter surrounding penumbra. When Earth’s penumbral shadow falls on the moon, it creates a very subtle eclipse, the barest shading of the moon’s surface. When the darker umbral shadow falls on the moon, it appears as if a “bite” has been taken from the moon’s face. Illustration via astro.washington.edu