A large explosion happened on May 18 at Hawaii’s Kilauea Volcano, and, at that time, the 1st serious injury was reported. USGS warned of the release of toxic gases in a plume called a laze, which happens when molten lava hits sea water. Images and videos here.

Kilauea Volcano has been spewing lava and belching hazardous gases on Hawaii’s Big Island since early May, and the BBC reported on Sunday, May 20, 2018, that the situation for residents is “steadily worsening.” At the summit, a large explosion happened at around midnight on Friday night (May 18) into Saturday, sending a plume of volcanic gas some 10,000 feet (two miles, or 3 km) into the air. Early in the day on May 20, media outlets were reporting the first serious injury from Kilauea. HawaiiNewsNow reported:

The injured man was sitting on a balcony at his home when “lava spatter” – projectile molten rock – landed on him. “It hit him on the shin and shattered everything there down on his leg,” a spokeswoman for the county mayor said.

Lava spatters can weigh “as much a refrigerator,” she told Reuters.

The man has reportedly been hospitalized with serious injuries.

In the meantime, on Saturday night, May 19, Hawaii Civil Defense confirmed that lava from Kilauea’s Fissure 20 had entered the ocean, creating conditions for toxic laze. Laze is what happens when molten lava hits sea water; a chemical reaction creates “hazy and noxious conditions” laced with hydrochloric acid and tiny particles of glass. USGS said:

Even the wispy edges of it can cause skin and eye irritation and breathing difficulties. 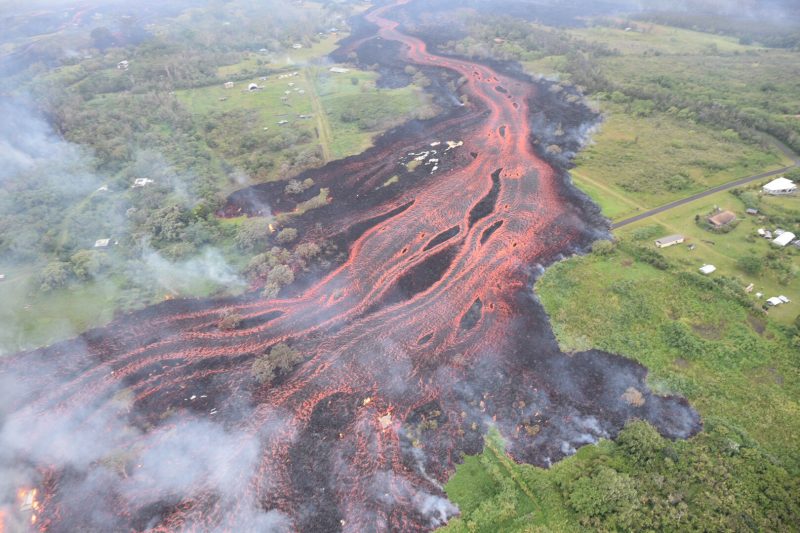 Helicopter overflight of Kilauea Volcano’s lower East Rift zone on May 19, 2018, around 8:18 a.m., HST. Lava flows emerging from the elongated Fissure 16-20 form channels. The flow direction in this picture is from upper center to the lower left. Image via USGS.

Eruption of lava and ground cracking in the area of Leilani Estates subdivision continues. Beginning yesterday and into today, the rate of lava eruption has increased. Fissure 17 is weakly active now, and Fissures 16-20 have merged into a continuous line of spatter and fountaining. Flows from the consolidated Fissure 20 crossed upper Pohoiki road late yesterday afternoon and continued flowing southward. This afternoon two flows from the merged fissure complex have joined less than a mile from the coast and continue to flow southward between Pohoiki and Opihikao Roads. The lava flow from Fissure 18 is stalled. It is unknown whether the flows will continue to advance, or stop, and new lava flows are likely given the rate of activity seen at the rift zone. Volcanic gas emissions remain very high. Read more

Click here for maps of recent activity at Kilauea Volcano

Click here for the latest photos and videos from USGS, at Kilauea

The following is the most recent video update from a USGS scientist (May 18):

More than 1,700 people have already evacuated their homes, particularly in the area around Leilani Estates, located in Hawaii’s District of Puna, where 27 homes had been destroyed as of May 9. 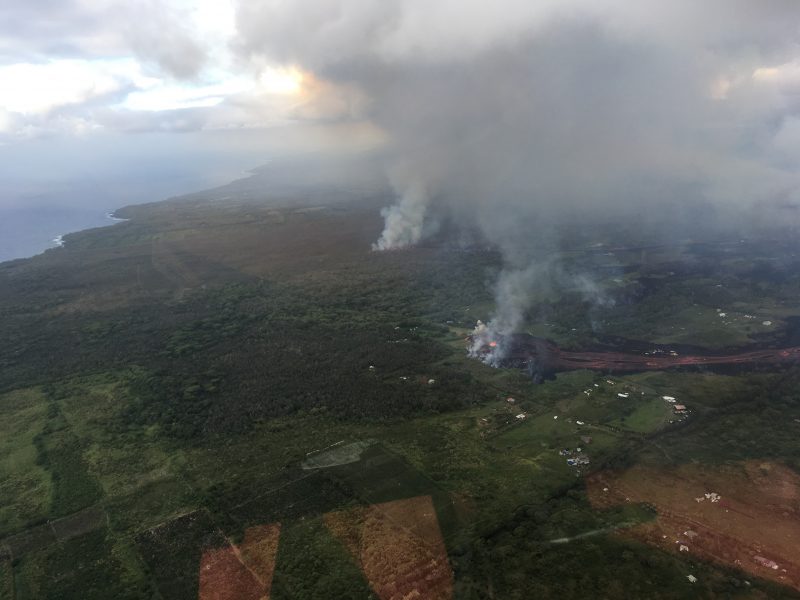 Helicopter overflight of the southeast coast of the Puna district during the early morning hours of May 19, 2018. Flows are moving downslope toward the ocean. Photograph courtesy of the Hawai`i County Fire Department/via USGS.

The Hawaiian Volcano Observatory reported on May 14 on “speculative stories, rumors and blogs” about a possible Pacific-wide tsunami, caused by conditions at Kilauea:

There have been several recent highly speculative stories, rumors and blogs about the stability of the south flank of Kilauea and the potential for a catastrophic collapse that could generate a Pacific-wide tsunami. We wish to put these speculations in their proper context by presenting observations of the current situation and an assessment of past evidence of landslides from Kilauea.

There is no geologic evidence for past catastrophic collapses of Kilauea Volcano that would lead to a major Pacific tsunami, and such an event is extremely unlikely in the future based on monitoring of surface deformation … Geologic history combined with models of south flank motion suggest that the likelihood of a catastrophic failure event is incredibly remote. Read more

The following video is from May 14, when a new fissure in Hawaii’s Puna District sent gases and lava exploding into the air, spurring officials to call for more evacuations as residents waited for a possible major eruption at Kilauea Volcano’s summit. 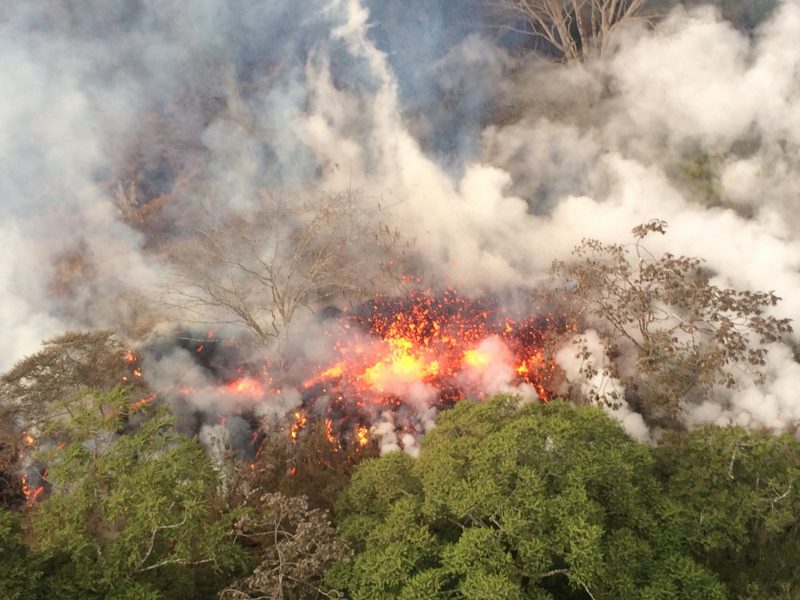 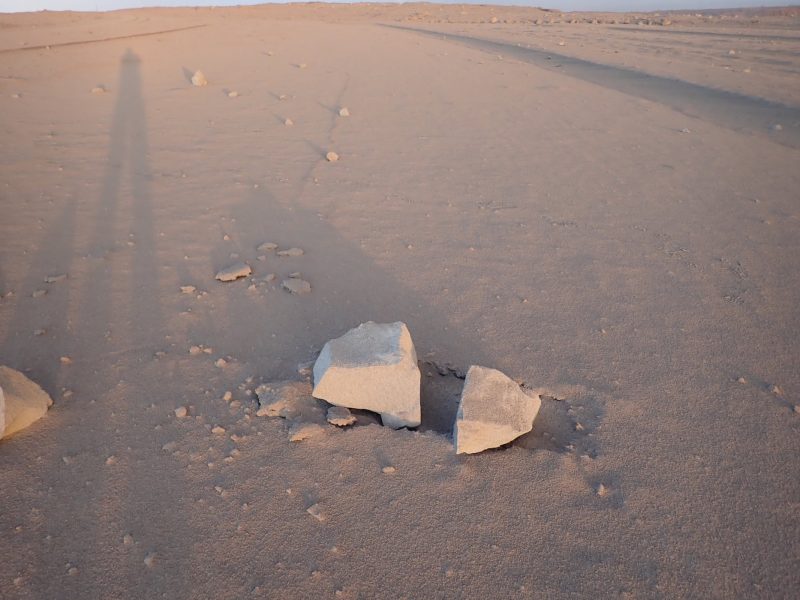 The Overlook vent on the summit of Kilauea threw out chunks of rock on May 16 that hit the ground near a parking lot, breaking apart on impact. The rocks were about 24 inches (60 cm) before they hit. Image via USGS. 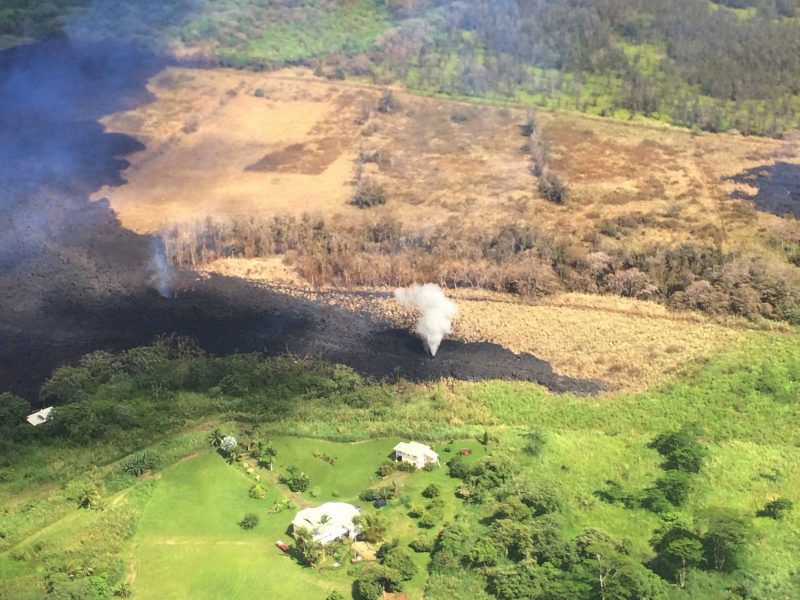 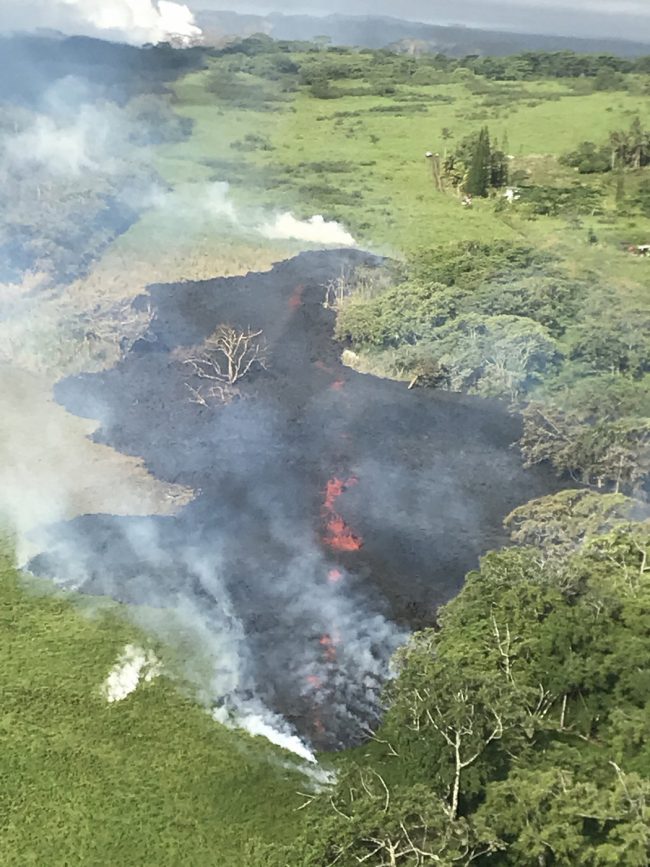 A flow emerges from Fissure 17 on May 13. Image via USGS. 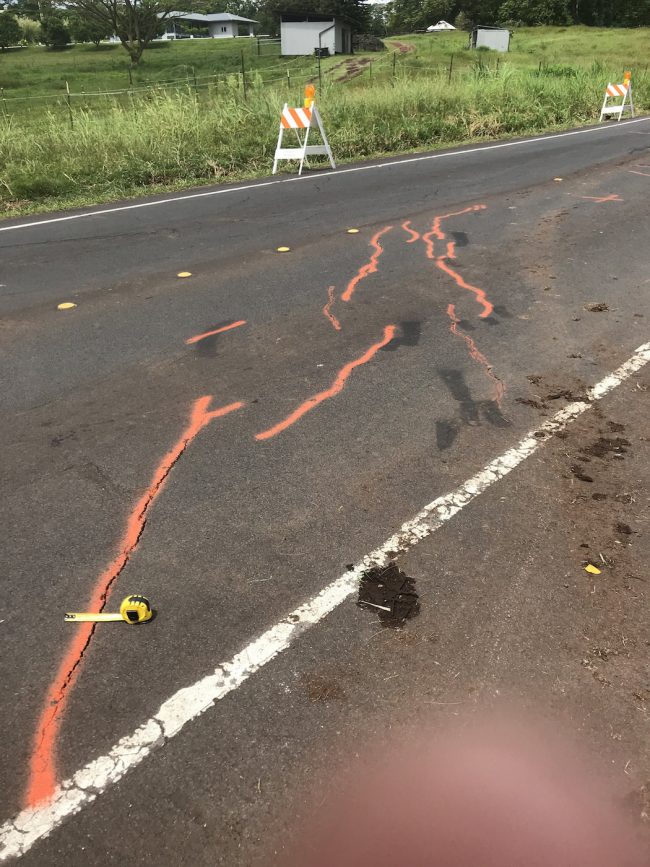 Cracks on Highway 132 on the Big Island on May 13. Researchers marked the cracks with orange spray paint to track changes over time. Image via USGS.

Bottom line: A large explosion happened on the night of May 18, 2018, at Hawaii’s Kilauea Volcano. The 1st serious injury was reported on May 19. Molten lava reached the ocean on May 20, and the USGS warns of the release of toxic gases in a plume called a laze. Latest images and videos here.