The Juno spacecraft captured this image during its 11th close flyby of the planet. It shows swirling cloud formations around Jupiter’s south pole. 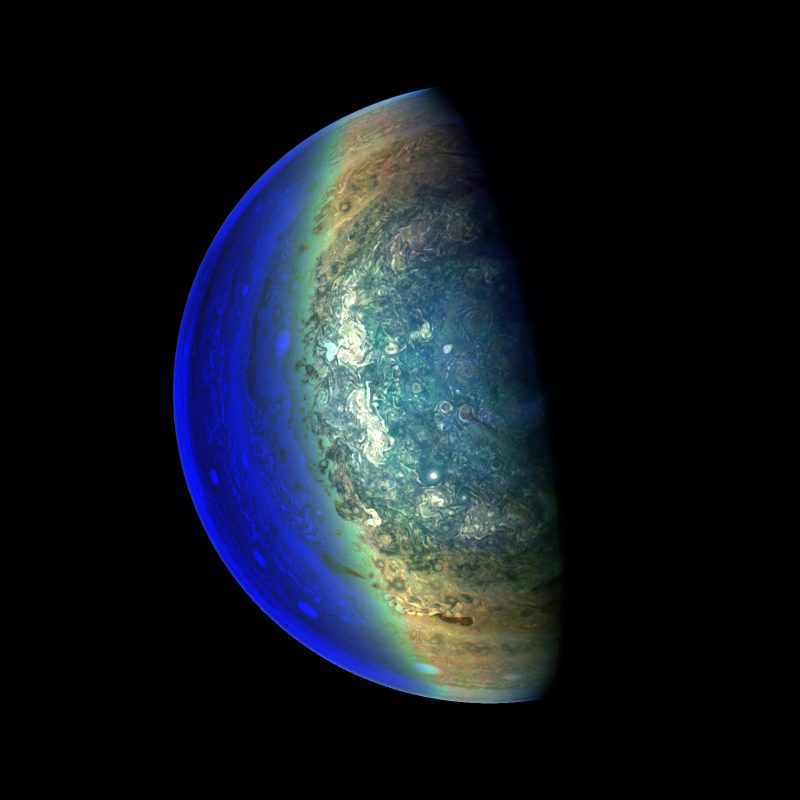 NASA released this dramatic image from the Juno spacecraft on March 2, 2018. It’s a color-enhanced image acquired during Juno’s 11th close flyby of Jupiter on February 7. At the time this image was captured, the spacecraft was 74,896 miles (120,533 km) from the tops of Jupiter’s clouds.

The image captures the swirling cloud formations around the south pole of Jupiter, looking up toward the equatorial region.

Here’s more about the image from NASA:

To make features more visible in Jupiter’s terminator — the region where day meets night — the Juno team adjusted JunoCam so that it would perform like a portrait photographer taking multiple photos at different exposures, hoping to capture one image with the intended light balance. For JunoCam to collect enough light to reveal features in Jupiter’s dark twilight zone, the much brighter illuminated day-side of Jupiter becomes overexposed with the higher exposure.

This image is one in a series of images taken in a Juno mission experiment to capture the best results for illuminated parts of Jupiter’s polar region. The image was processed by citizen scientist Gerald Eichstädt using data from the JunoCam imager. You can peruse and process JunoCam’s raw images yourself, here.