A summer solstice sunset at Loughcrew in Ireland, a megalithic burial ground dating back to approximately 3500 and 3300 BC. 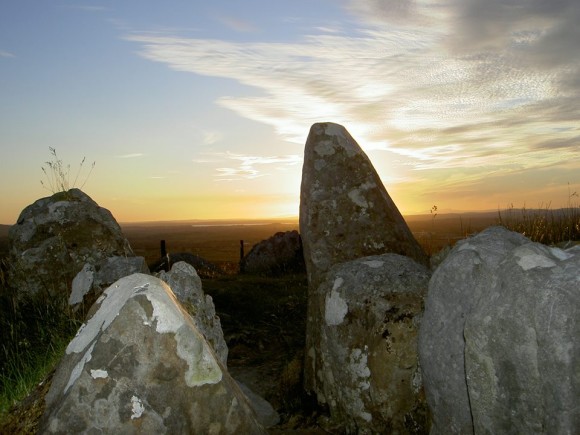 The exact time of this solstice is Friday, June 21, at 5:04 UTC, or 12:04 a.m. Central Daylight Time in the U.S. Here’s how to translate to your time zone. It’s likely that, by the time you read this, the solstice will have already happened.

Everything you need to know about the 2013 June Solstice

This photo was posted on the EarthSky Facebook page yesterday. It’s a site called Loughcrew, near Oldcastle, County Meath, Ireland. At this site, there are ancient burial grounds dating back to approximately 3500 and 3300 BC. Thank you to Irish Medieval History on Facebook, who also posted this description:

Great fire festivals are celebrated in many European countries and Midsummer is especially important in the cultures of Scandinavia, Finland and the Baltics where it is the most celebrated holiday apart from Christmas and New Year’s Eve. The traditions of the ancients live on in the antics of the revellers even if their original significance has been forgotten. Below are extracts from a paper published in 1889 entitled “The Holiday Customs of Ireland” by James Mooney in the Proceedings of the American Philosophical Society.

In pre-Christian Ireland the first fire was lighted on the hill of Howth, on the east coast, near Dublin, and the moment the flame appeared through the darkness a great shout went up from the watchers on all the surrounding hilltops, where other fires were quickly kindled until soon the whole country was in a blaze.

“There was a sort of poetry and of mystery about this system, which certainly exercised a powerful fascination over the human mind. The altar and the carn of the Druid have been deserted for ages, and yet, to this day, there are living vestiges and memorials of his anniversary fire in Ireland. At a certain period of the summer, when the shades of evening gather over the face of the land, flames of fire are seen to spring like magic from hill to hill.”

Midsuminer fires still blaze from every hilltop in Ireland on the eve of June 23, now called in Gaelic, Oidche Tein’ Seaghan (Eha or Eel Chin Shawn), or the “Night of John’s Fire.”

Saint John’s eve is also a favourite fairy season, when the ” good people” hold their midnight revels in every green fort. That the same belief existed in England is evident from Shakespeare’s “Midsummer Night’s Dream.” On this night especially the fairies ar on the watch to carry off incautious mortals, particularly women and infants who ar not protected by a sprig of lusmor (foxglove), or some other safeguard against fairy influence. An old writer of 1723, quoted by Brand, mentions a belief that on this eve every human soul leaves its bodily habitation and takes a journey to that place on land or sea where death shall finally separate them forever. This is also a chosen time for visiting many holy places, especially the numerous wells called after Saint John.

The following account of the celebration, as still carried out in the west, is given by Lady Wilde: “The fires are still lighted on St. John’s eve on every hill in Ireland. When the fire has burned down to a red glow, the young men strip to the waist and leap over or through the flames; this is done backwards and forwards several times, and he who braves the greatest blaze is considered the victor over the powers of evil, and is greeted with tremendous applause. When the fire burns still lower, the young girls leap the flame, and those who leap clean over three times, back and forward, will be certain of a speedy marriage and good luck in after-life, with many children. The married women then walk through the lines of the burning embers; and when the fire is nearly burnt and trampled down, the yearling cattle are driven through the hot ashes, and their back is singed with a lighted hazel twig. These hazel rods are kept safely afterwards, being considered of immense power to drive the cattle to and from the watering places. As the fire diminishes the shouting grows fainter, and the song and the dance commence; while the professional story-tellers narrate tales of fairy-land, or of the good old times long ago, when the kings and princes of Ireland dwelt amongst their own people, and there was food to eat and wine to drink for all comers to the feast at the king’s house. When the crowd at length separate, every one carries home a brand from the fire, and great virtue is attached to the lighted brone which is safely carried to the house without breaking or falling to the ground. Many contests also arise amongst the young men, for whoever enters his house first with the sacred fire brings the good luck of the year with him.”