It’s been snowing in Hawaii 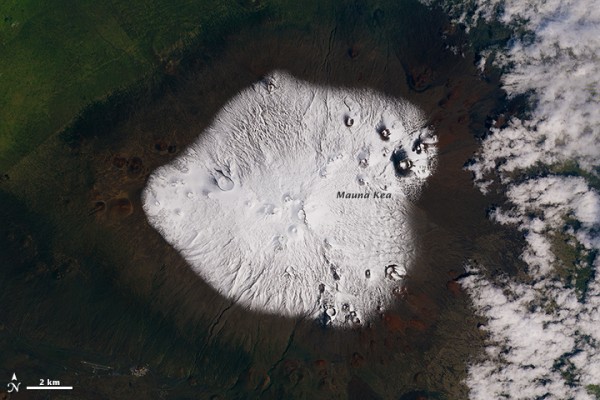 Landsat 8 captured this view of the snow-capped summit of Mauna Kea on March 10, 2015. Image via NASA Earth Observatory and Joshua Stevens, using Landsat data from the U.S. Geological Survey.

Last week, the National Weather Service issued several snowstorm and blizzard warnings for summits higher than 3,400 meters (11,000 feet) on the Big Island of Hawaii. Who knew? It turns out that snow isn’t unprecedented – although it is uncommon – on tropical peaks. The image above is from March 10, 2015, when some snowfall had already accumulated on Mauna Kea, a dormant volcano and Hawaii’s highest point at 4,205 meters (13,800 feet) above sea level. As you can see, there’d been snow accumulation on Mauna Kea in the days before the blizzard warning, from storms in the first week of March.

The snowstorms in Hawaii have ended now, but not before closing the roads to Mauna Kea as described in the video below from March 13:

By the way, Hawaii’s Big Island – which is composed of 5 shield volcanoes – also has Hawaii’s most diverse climate, containing 10 of worlds the 15 climate zones.

Read more about the image at top from NASA Earth Observatory.