Is this region empty of stars?

Meet the Coalsack Nebula, a cloud of dust and gas in space – birthplace for new stars. In millions of years, the Coalsack’s stars will light up and shine brightly. 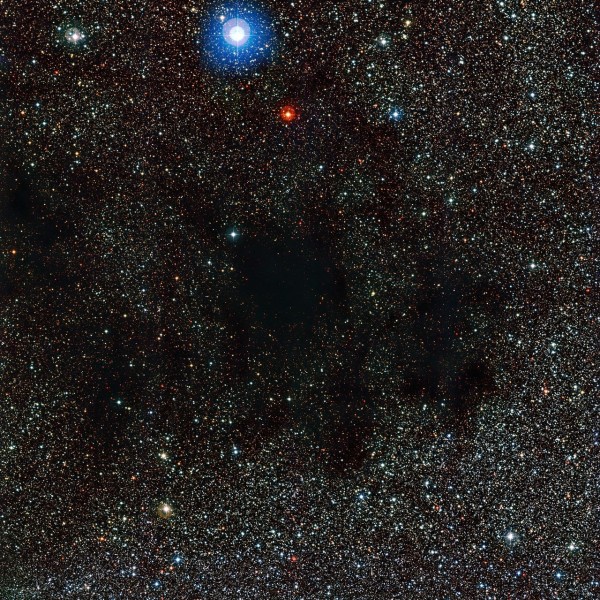 The Coalsack Nebula, as captured by the Wide Field Imager on the MPG/ESO 2.2-meter telescope in La Silla, Chile. Image via ESO.

Stars are everywhere in space. So why does this part of space look empty of stars? It’s because we’re looking toward a dark cloud in space that hides the light of stars shining behind it. This is a new image, released this week (October 14, 2015) by the European Southern Observatory (ESO). It shows part of the huge cloud of dust and gas known to astronomers as the Coalsack Nebula. The dust in this nebula absorbs and scatters the light from background stars, and thus the nebula looks dark. ESO said in a statement this week:

The Coalsack Nebula is located about 600 light-years away in the constellation of Crux (The Southern Cross). This huge, dusky object forms a conspicuous silhouette against the bright, starry band of the Milky Way and for this reason the nebula has been known to people in the southern hemisphere for as long as our species has existed.

The Spanish explorer Vicente Yáñez Pinzón first reported the existence of the Coalsack Nebula to Europe in 1499. The Coalsack later garnered the nickname of the Black Magellanic Cloud, a play on its dark appearance compared to the bright glow of the two Magellanic Clouds, which are in fact satellite galaxies of the Milky Way. These two bright galaxies are clearly visible in the southern sky and came to the attention of Europeans during Ferdinand Magellan’s explorations in the 16th century. However, the Coalsack is not a galaxy. Like other dark nebulae, it is actually an interstellar cloud of dust so thick that it prevents most of the background starlight from reaching observers.

Read more from ESO about the Coalsack Nebula and this new image.