One frame from a time lapse of the Milky Way, with some light pollution and fast-moving cloud cover … and an iridium flare. 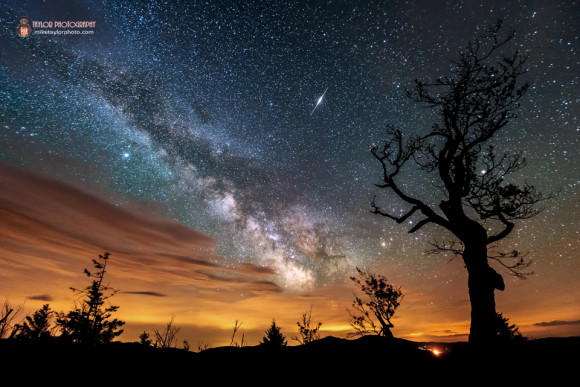 Mike Taylor in Maine contributed this interesting photo. He calls it Nature and Man. It’s one frame from a time lapse of the Milky Way, photographed in western Maine. The shot includes quite a bit of light pollution and some fast-moving cloud cover. Most of the light pollution in this image is coming from Farmington, Maine which is about 35 miles from this location. Perhaps most interesting to most skywatchers is the bright iridium flare captured here. As Mike said, they are often mistaken for meteors, but, instead:

An iridium flare is a specific type of satellite flare that is made when the antennas of an Iridium communication satellite reflect sunlight directly onto the surface of the Earth. The satellites are in a near-polar orbit at an altitude of 485 miles. Their orbital period is approximately 100 minutes with a velocity of 16,800 miles per hour.

The uniqueness of Iridium flares is that the spacecraft emits ‘flashes’ of very bright reflected light that sweep in narrow focused paths across the surface of the Earth. An Iridium communication satellite’s Main Mission Antenna is a silver-coated Teflon antenna array that mimics near-perfect mirrors and are angled at 40-degrees away from the axis of the body of the satellites. This can provide a specular reflection of the sun’s disk, periodically causing a dazzling glint of reflected sunlight.

At the Earth’s surface, the specular reflection is probably less than 50 miles wide, so each flare can only be viewed from a fairly small area. The flare duration can last from anywhere between 5 to 20 seconds and can easily be seen by the naked eye.

The footage from this time lapse will be featured in my upcoming short film Shot In The Dark.