Iridescent clouds appear in the same direction as the sun. Rainbow-like colors appear irregularly over the clouds in the form of colored edges, spots and bands. 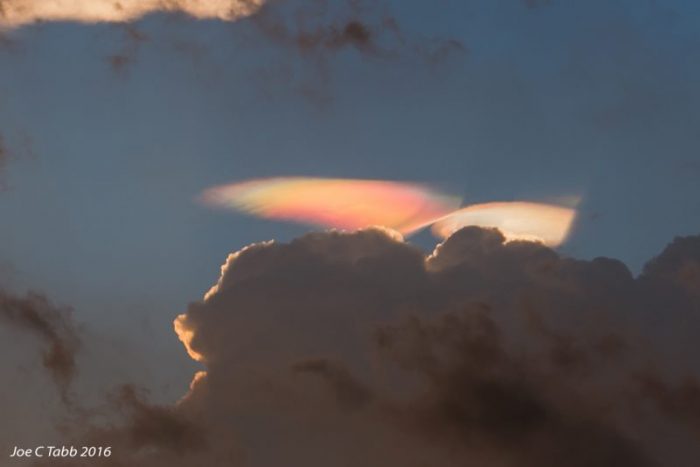 I was out to take pictures of lightning and noticed this brilliant iridescent cloud over a distant thunderstorm.

Nowadays, we often hear people erroneously associate these clouds with something nefarious. Nothing could be farther from the truth; they are a natural phenomenon, associated with especially tiny ice crystals or water droplets in the air. In 1954, the Dutch astronomer M. Minnaert wrote in his classic and very beautiful book The Nature of Light and Color in the Open Air:

Iridescent clouds appear in the same direction as the sun. They can appear irregularly over the clouds in the form of colored edges, spots and bands … Our feelings at the sight of such lovely clouds are of intense delight, which is difficult to describe, but which is certain due, to no small extent, to the purity of the colors, their delicate mingling and their radiant light.

See many photos from the EarthSky community of iridescent clouds.

Read more about these clouds from another true expert, Les Cowley at the great website Atmospheric Optics. 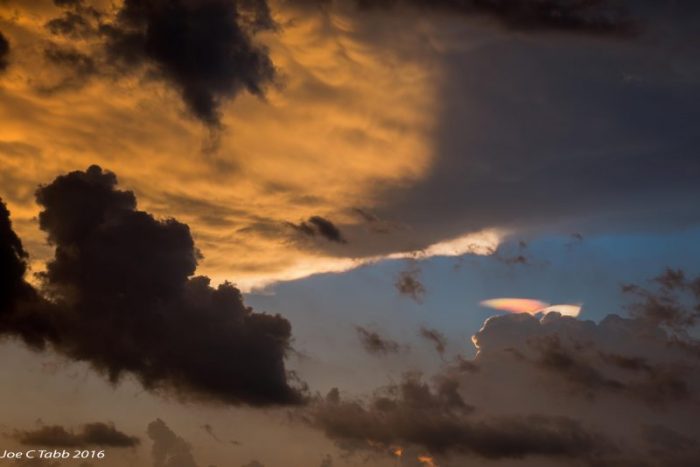 A larger view of the photo above, by Joe Tabb. Joe wrote: “The storm that had just passed over me left the mammatocumulus cloud partially seen in the upper left.” More about mammatus clouds here.

Bottom line: Photo of an iridescent cloud, from Joe Tabb in Kentucky. They are a natural phenomenon, associated with especially tiny ice crystals or water droplets in the air.