Plus a tajinaste rojo, a strange and very large plant endemic to the island of Tenerife. 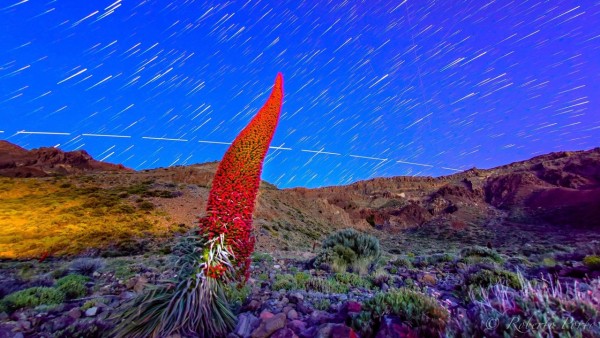 Roberto Porto posted this photo at EarthSky Facebook in late May, 2016. It’s a pass of International Space Station (ISS) over Tenerife, one of Spain’s Canary Islands. The large plant is a tajinaste rojo, an endemic plant of this island. Roberto said the tajinaste plants typically blossom in May on this island, and he said some grow as high as 10 feet (3 meters). Of his photo, he wrote:

In this picture the startrail of a bright ISS passes in perpendicular direction to the trails of the rising stars.

The tajinaste is illuminated by the traffic lights of the many cars that drive late in the park to take pictures of these fantastic plants in Teide National Park.

I used a Nikon D5300, with Nikkor fisheye … to take 40 exposures with changing exposure times as the natural light was changing.

Then I used starstack software and ligthroom CC for final adjustments.