This image and video aren’t artists’ illustrations. They’re from a real time-lapse sequence of images – acquired by the Hubble Space Telescope – of the tiny moon Phobos orbiting Mars. Cool!

NASA released this time-lapse video on July 20, 2017, which, by the way, is the 41st anniversary of the Viking 1 landing on Mars and the first image from the Martian surface. How far we’ve come since then! Every day for the past two decades, the U.S. has had a spacecraft presence at Mars. Meanwhile, observing Mars from Earth is a different critter altogether. Earth-based – or Earth-orbiting-satellite-based – observations of the Red Planet get easier or harder depending on where Earth and Mars are in their respective orbits around the sun. The video above – which is a time-lapse capture of a portion of the path of Mars’ tiny moon Phobos around Mars – comes to us via the Hubble Space Telescope, which orbits Earth. Hubble captured the image in May, 2016, the last time Earth was passing between Mars and the sun, and the distance between our two worlds was relatively small.

Hubble took 22 minutes to snap 13 separate exposures of the little Martian moon. The transitions between frames have been smoothed to illustrate continuous motion, NASA said, adding:

Phobos completes an orbit in just 7 hours and 39 minutes, which is faster than Mars rotates. Rising in the Martian west, it runs three laps around the Red Planet in the course of one Martian day, which is about 24 hours and 40 minutes. It is the only natural satellite in the solar system that circles its planet in a time shorter than the parent planet’s day. Hubble photographed Phobos orbiting the Red Planet on May 12, 2016, when Mars was 50 million miles from Earth. This was just a few days before the planet passed closer to Earth in its orbit than it had in the past 11 years. 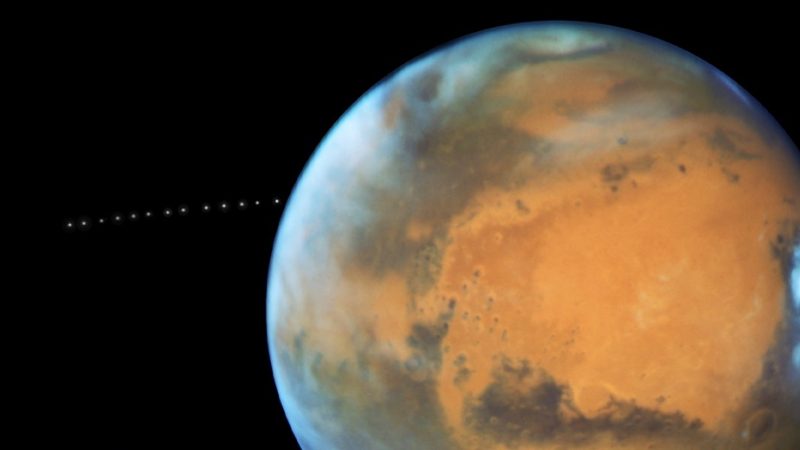 Discovered in 1877, the tiny, potato-shaped moon Phobos is so small that it appears starlike in the Hubble pictures. Image via HubbleSite.

So … if this image is from 2016, and if Mars was closer than it had been in 11 years … where is Mars now? In fact, since Earth takes a year to orbit the sun, and Mars takes about two years to orbit the sun, Mars alternates being faint and bright in our sky (in other words, it alternates being far from Earth and nearby). And, in fact, 2017 has been a lousy year for Mars. It’s been faint and inconspicuous for much of this year. And, in July 2017, the planet is more or less behind the sun from Earth, so not visible in our sky at all. Read more about Mars at EarthSky’s guide to the bright planets.

Hang in there, Mars fans! 2018 will be here soon. And, in the meantime, isn’t this a cool Hubble image and video?