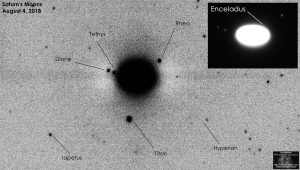 Here is a view of at least seven of Saturn’s moons taken on August 4, 2018. Two different over-exposed images were used using the ZWO ASI290MC camera and SharpCap software package.

Thank you! Your submission has been received!
Oops! Something went wrong while submitting the form.
END_OF_DOCUMENT_TOKEN_TO_BE_REPLACED